Can You Run a House on Solar Power? | Homebuilding & Renovating Skip to content

The sun delivers more energy to the earth in an hour than the world uses in a year, according to the US Government’s Department of Energy. An extraordinary statistic, but perhaps misleading in that the amount of energy actually available will vary with where you are in the world, the season, the time of day and the technology available to harvest it. Nonetheless, surely it should be possible to run a new home entirely on solar power?

Solar energy arrives here in the form of light and heat. We use technology to capture, magnify and convert it into useful purposes. As far as a house is concerned, there are three ways to do that:

There is a fourth to consider too — PVT. In basic terms, PVT is a hybrid solar panel consisting of PV and thermal functionalities. PVT panels can contribute electricity while heating hot water.

It used to be considered by many that the UK did not receive enough sunshine to justify investing in solar power. The recent proliferation of PV arrays on roofs and in solar farms has dispelled that myth and it is the efficient use of all forms of solar energy that makes the idea of the solar-powered house a viable possibility.

The one issue that could put the breaks on this notion – storing this power (solar power is generated in the day, which is not always when we need it) – is beginning to be resolved, too. You can read more about how to store solar power here.

How Much Energy is Enough to Power a Home?

This is a very good question, and an essential piece of information to feed in to the design process. We need to know how much energy the house requires before deciding how much we can or want to generate.

There are plenty of ‘UK average’ figures:

However, at best these are only a starting point. What is wanted is a detailed and accurate calculation of the energy demand based on the building and the people in it. This ideally needs to be completed by a specialist, as working out how much electricity is needed for lighting, appliances, etc, and so on is a tricky process.

These will be largely fixed amounts: we can choose to have LED lighting rather than tungsten filament and A+, A++ and A+++ rated appliances, but that is about as far as we can go.

It is the fabric of the building where we can have the greatest influence. The insulation and airtightness are important, but glazing, shading and orientation are also key issues that need to be looked at.

And then there is the question of balance: how much of the budget can be spent on renewable energy technology, how much on extra insulation and airtightness, and what are the rewards?

There are a number of ways of solving this problem and the three examples on the following pages give some idea of what is possible. Regardless of the route taken, the following projects all demonstrate that the solar-powered home is a practical option for self builders, regardless of budget or project size. 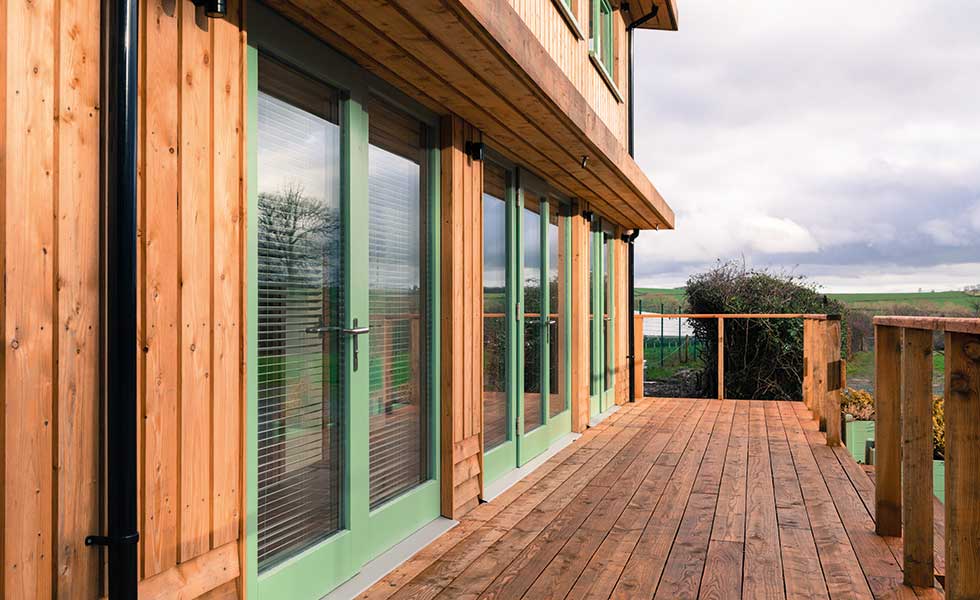 Ty Solar, based in Pembrokeshire, is the brain-child of Glen Peters. His idea was to develop a house that was both sustainable and affordable, ideally running entirely on solar energy.

Glen Peters brought together a small team comprising himself, architect Gareth Dauncey, and Jens Schroeder, a builder with sustainable construction experience and passion. Together they designed and built a three bedroom, solar-powered house, essentially as proof of the concept, and are now building an estate of six solar houses, due for completion in June 2016, with plans in place to build 1,000 solar houses over the next 10 years.

The average space heating demand here is below 25kWh/m²/yr, compared to 31kWh for the Northamptonshire house and 39kWh for the solar house in Kent featured below.
What Glen Peters and his team have done is to develop a method of building energy-efficient, attractive, spacious, robust, three bedroom houses, at £1,000 to £1,100/m², including the PV panels. The anticipated running cost for these remarkable houses will be below £300 per year. The way he has done this is both simple and complex — simple, in that it was a matter of focusing intently on the design and eliminating everything unnecessary, and complex for exactly the same reasons.

To make the project just that bit harder, Glen Peters also wanted materials and labour to be locally sourced. He set up an apprenticeship programme to provide skilled labour and the timber frames are made from trees from a local forest, kiln-dried, processed and manufactured in the company’s own factory. 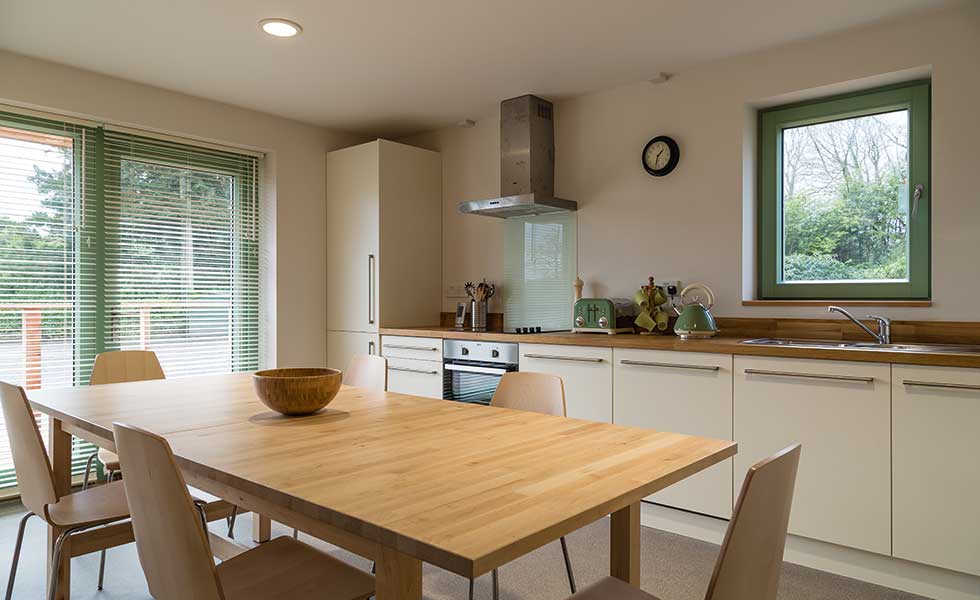 Passive solar heating and thermally efficient construction materials were chosen for Ty Solar. Annual running costs are expected to be below £300 per year. Sustainable materials, including locally sourced timber, were also used in the construction

Insulation levels are also very close to Passivhaus standard, with an airtightness of 0.9m³/hr. Passivhaus was not a requirement, or even a consideration, but reducing energy demand was considered an essential prerequisite for a solar-powered house.

Large, south-facing glazed areas, with appropriate shading, produce a lot of passive solar heating, meaning that space heating is provided by a couple of simple electric radiators. This, in turn, eliminates the cost of wet radiators or underfloor heating. It is that sort of innovative thinking that has led to this truly remarkable house — a house that produces enough energy to even power an all-electric car.

The problem with solar energy is that we have access to most of it when we want it least — in the daytime and in summer. 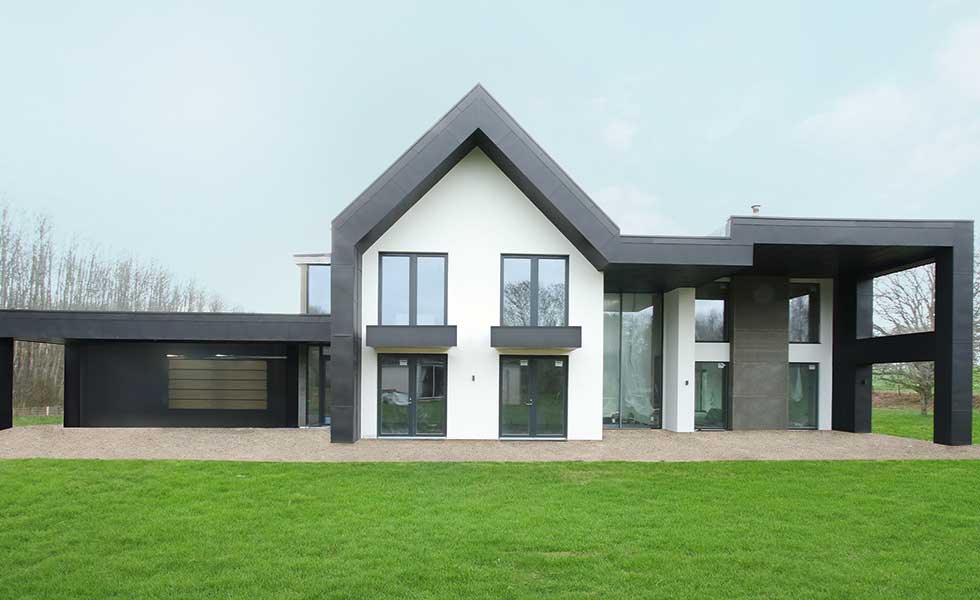 This architecturally stunning five bedroom property in Bekesbourne, Kent, was designed and built by Caplin Homes with the specific intention of being solar powered. It incorporates:

With a floor area of 431m2, this is a large property, and even with thermal resistance close to Passivhaus standards and a low airtightness level of 4.5m3/hr, it still needs a lot of energy. EPC (energy performance certificate) figures suggest a heating load of 17,180kWh per year and domestic hot water at 2,753kWh, although it is accepted that these are often at odds with real life. The 9kWp PVT array can produce around 23,000kWh of heat each year but most of this is, obviously, produced in the spring and summer months, when not much of it is needed.

To address this problem, the property uses a technology called the Earth Energy Bank: a system of 90 boreholes, each 1.2m deep, below the house itself and connected to a pipework grid. In summer the Vaillant heat pump diverts the excess heat to the Earth Energy Bank, where it (mostly) remains until winter when the heat pump extracts it again to warm the house.

As a result of this technological approach, the house is close to zero carbon and the investment ensures running costs are – taking the FiT (Feed-in Tariff) scheme and the domestic RHI (Renewable Heat Incentive) into account – almost zero!

While PV and solar thermal panels produce either electricity or heat, PVT (photovoltaic thermal) panels generate both. They look like PV panels but have a heat exchanger on the back.

We assume the bright sun of summer will be best but PV panels are actually more efficient in cold sunny weather; as they get warmer they become less efficient. The panel loses around 0.5% efficiency for each 1°C over 25°C. PV panels can hit 70-80°C in bright sunlight, meaning a 25% loss in efficiency at those peak times when they should be generating most.

The recent proliferation of solar farms has put pressure on the national electricity grid with a surge in electricity generation in the daytime. An innovative solution to be trialled in Wadebridge, Cornwall, is to encourage householders to change their habits by offering low-cost electricity in the daytime.

The Sunshine Tariff, provided by Wadebridge Renewable Energy Network, will be offered to residents with a rate of 5p/kWh between 10am and 4pm from April to September and a higher rate of 18p at all other times. The trial will use smart metering technology to see how much customers could save by changing their electricity usage patterns to take advantage of the low daytime rate. 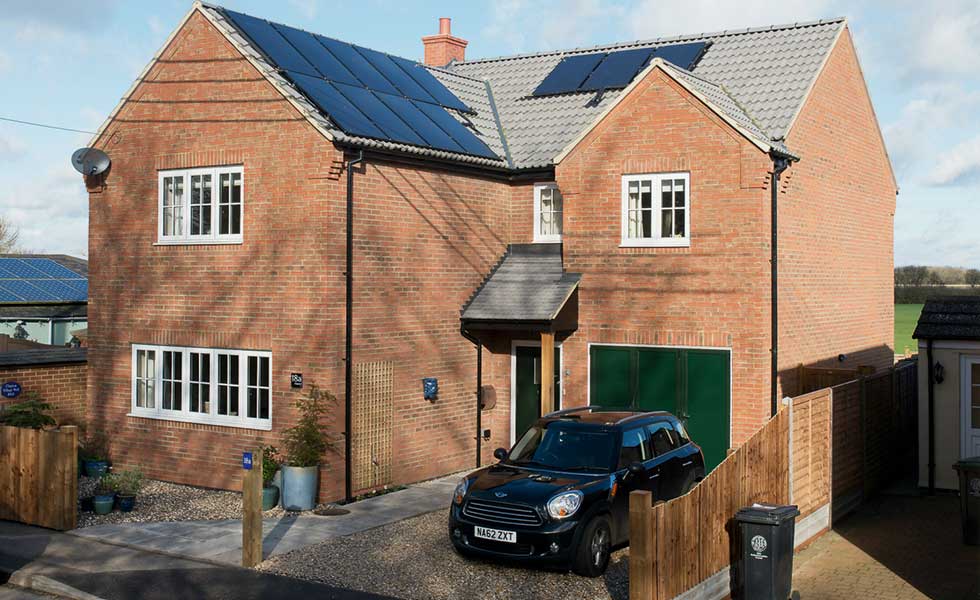 This family home in Clopton, Northamptonshire, demonstrates that providing genuinely low CO2 emissions and low running costs can be done for the ‘average’ UK home.

The space heating energy demand equates to 31kWh/m2/yr, compared to Building Regulations requirement for 55kWh/m2/yr and Passivhaus at 15kWh/m2/yr. While the insulation levels are very close to Passivhaus, the standard demands airtightness of less than 0.6m3/hr — rather than the 2.8m3/hr achieved here.

It seems there may have been a trade-off. The cost of the renewable energy system – 12 PVT panels, a heat pump and a 28m borehole Energy Bank – is around £24,000. Achieving airtightness close to Passivhaus standard would have a reasonably significant on-cost, but not save much in terms of the scale of the systems installed.

The PVT system will produce virtually all the heat needed in the house, but probably only half the electricity. So there is more reliance on grid electricity. This situation is not uncommon or unreasonable, as it is difficult to justify the extra investment in renewable energy to produce all the energy needed for a house of this size and build cost.

What These Houses Have in Common

These three very different houses have two key issues in common: they all incorporated the idea of solar energy from the design stage right through to construction, and they all recognised that improving thermal efficiency was essential to success.

In addition, they all achieved very low running costs. The projects in Kent and Northamptonshire used a variety of technologies applied to the house design and accepted the capital cost implications. In the case of Ty Solar, reducing capital cost was a key issue and this led to a focus on energy efficiency rather than technology. The Earth Energy Bank, developed by Caplin Homes, is also a leap in the right direction in storing heat.

What these three houses also show is that the solar-powered home is not only possible but a practical option for any self build, from starter homes to the more grandiose. The knowledge, the skills, the technology, everything necessary to build a solar house, exists and for the self builder it is simply a matter of deciding to go for it.