Click on any of the awkward plot types below to jump to that topic: 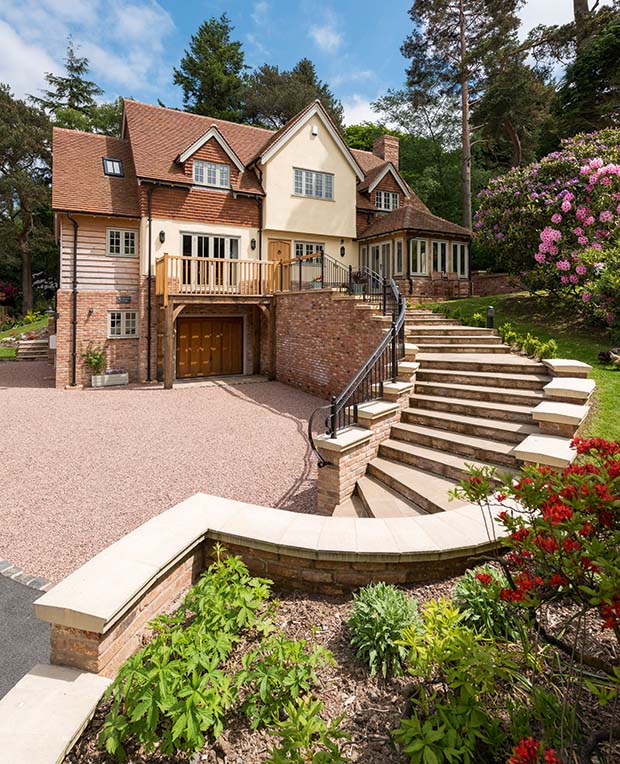 Creating access to the site was the first issue, and a natural spring on the plot also required land drainage to be laid to divert the water away from the construction area before work could commence. “Due to the nature of the site, we adopted a cut and fill process as part of the groundworks package,” explains Border Oak project manager Mark Benbow. “This enabled us to cut into the slope, therefore reducing the levels, but also to build a level area to enable access, material storage and to carry out works in a safe manner.” 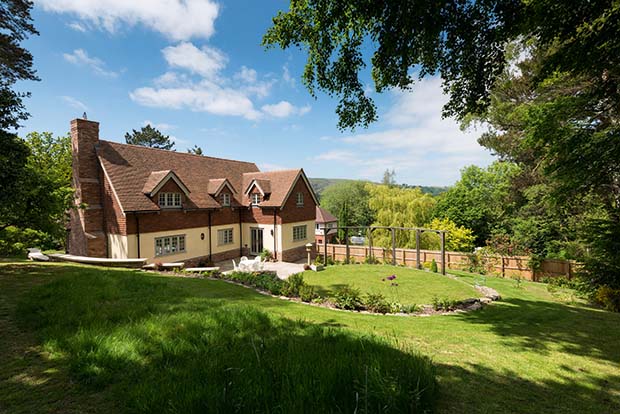 The three storey element to the front of the property reveals where the site was cut away, and a retaining wall holds back the soil while providing structural support. The team worked closely with Building Control too, and a dispensation was given with regards to Part M of the Building Regulations, requiring the steps to the front to have landing zones to provide rest areas for those with mobility problems — entry can also be via the garage which has stairs up to the house.

The four bedroom home has been constructed using structural insulated panels (SIPs) with an internal oak frame, and central jetty with a projecting middle core. There is a natural, organic feel from the palette of building materials (oak, lime render, brick, weatherboard cladding and a handmade clay tile roof with tile hanging) reflecting the local vernacular. 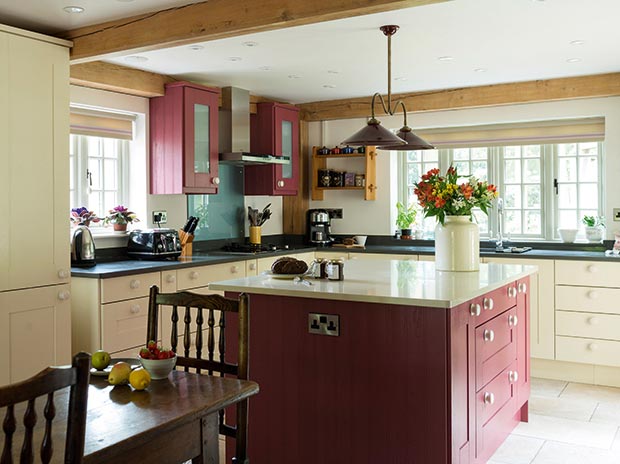 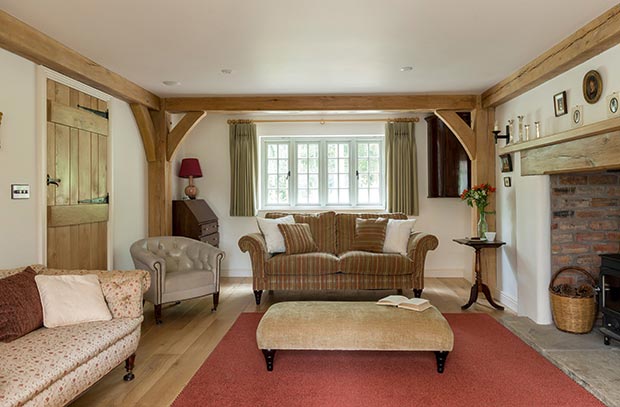 With the aim of not appearing ostentatious, the house retains a cottage feel and backs out on to the already established garden. Thanks to the mix of local building materials manages to exude an effortless charm, despite the amount of engineering work that went in to making the home buildable in the first instance. When asked of their feelings towards their new home, the clients replied: “The greatest achievement for the house was the fact that it was our own garden so we haven’t had to ‘move’ — essentially just created a new better home for ourselves in an area that we love.” 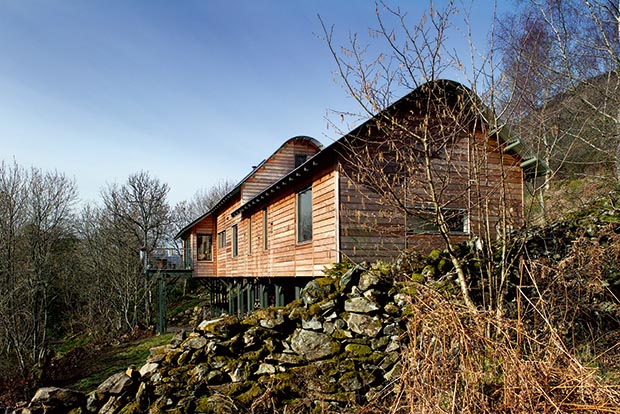 When you’re advised that it would be an impossible task to build on a plot, most would heed this warning; however architect Colin Smith and his wife Iona were prepared to take the risk in order to create their family home. When the couple came across the overgrown woodland plot, they knew they were in for trouble, with limited access being along a narrow track and no services on the steep sloping site.

“We agreed to buy it for just £20,000, conditional upon getting planning permission,” Colin says. “Everyone else was very negative, but the planners themselves didn’t have a problem because the plot falls within the designated local plan for development.” 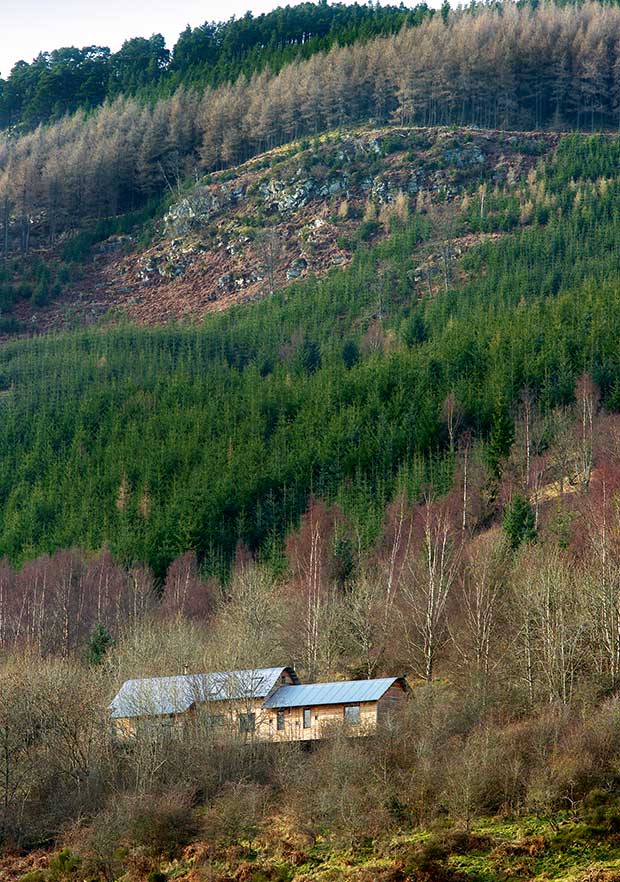 With the design of the house being entirely governed by the sloping site, the longhouse-style home is raised upon a series of wooden stilts built into steel shoes in order to work with the steep gradient of the plot. It’s clad in larch weatherboarding with curved corrugated aluminium roofs. “Everything was carefully detailed,” explains Colin. “It might appear simple, but only the snug is a conventional box-shaped room with a flat ceiling. Everywhere else there are curves, voids and varying ceiling heights which meant that it wasn’t a particularly easy house to build.” 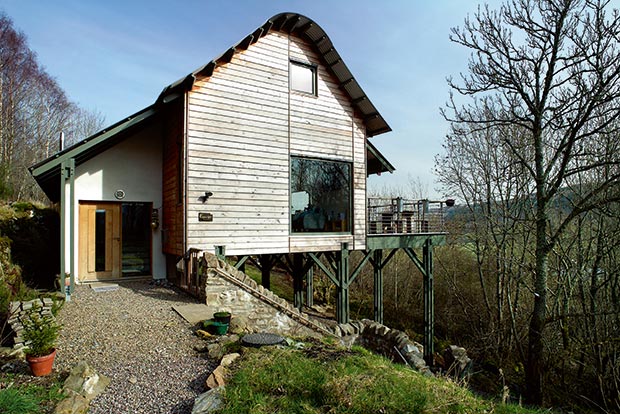 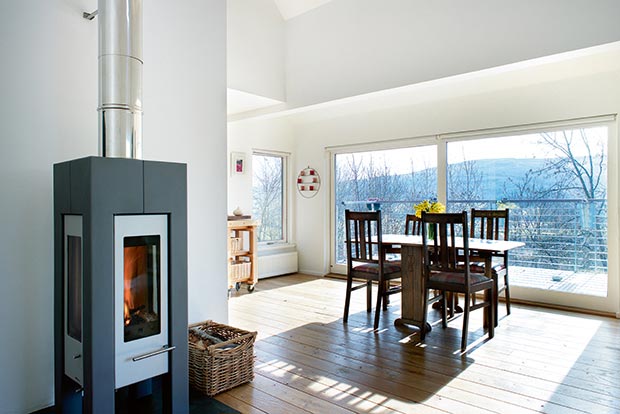 Due to the constraints of the site, the porch (the only part of the house touching the ground) had to be built of blockwork, and a staircase here leads up to the timber frame, stilt-supported structure. To further manage the problems with the plot, a new driveway was created to provide access to the site; however it can still only be accessed via small vehicles. Permission also had to be obtained from a neighbouring farmer to bring services across his land. The couple hired a single contractor to install the heating, plumbing and electrics, and a wood-pellet stove with a back boiler now runs the central heating and hot water, with a woodburner in the sitting room providing additional heat when required.

“It’s such a warm, comfortable house, and we love the fact that it feels so private and remote,” says Iona.The result is a contemporary four bedroom home surrounded by beautiful woodland that offers the family the space they needed, as well as having a home now worth more than double what it cost to build — not bad for a project that was deemed impossible. 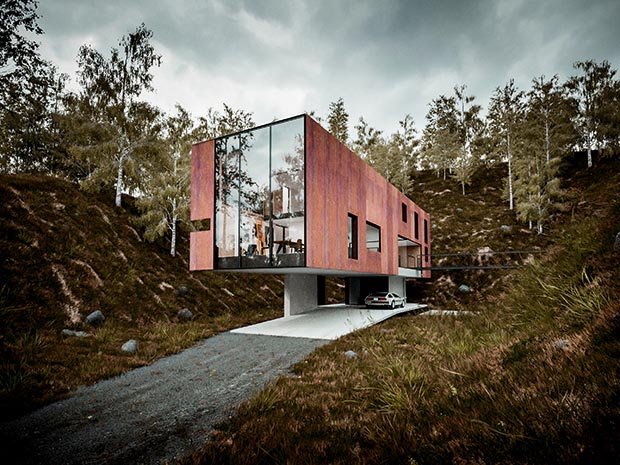 Situated at the bottom of an isolated quarry on the edge of the Brecon National Park, this dramatic new home amid the exposed surrounding jagged rock face is truly a thing of wonder.“It’s a natural, considered response to the reality of the quarry’s dark, damp and hostile environment,” explains the brains behind the project, Kristian Hyde of Hyde + Hyde Architects. “The response was to make it ephemeral, powerful and elusive — to make it look like the quarry was only there for this home to take shape within.” 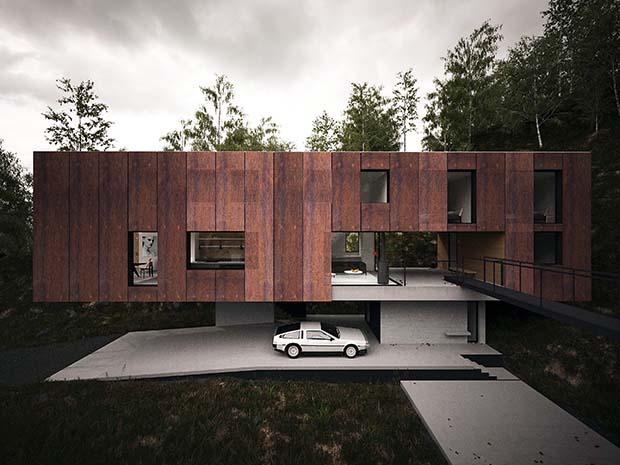 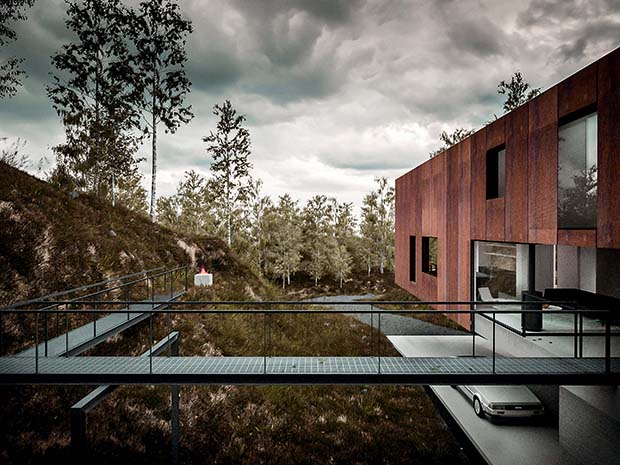 With the complexity of the site and the associated risk of touching the quarry walls, the team sought to develop the structure with this in mind. “Our first reaction when visiting the site was a strong feeling that it should be up in the air, suspended like some sort of miracle construction within the quarry walls,” says Kristian. The response to dealing with the constraints of the site was a dramatic cantilevered structure, with the first floor constructed on an in-situ concrete slab, suspended above the quarry basin. 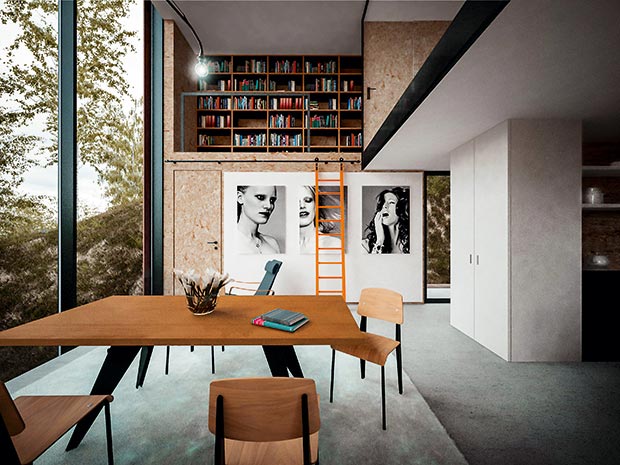 The bold design was supported by the clients, who gave Kristian and his team a free rein to create a home that worked with the difficult site.“It is rare to meet a client that gives complete freedom,” says Kristian. “Such opportunity is thoroughly embraced and only comes from trust.” 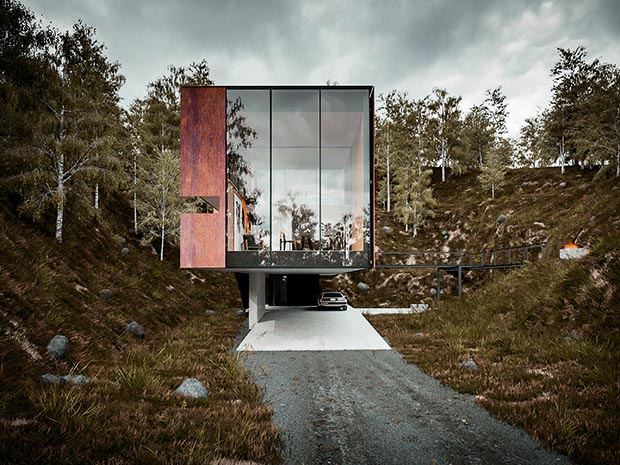 Built using SIPs for the walls and second floor, the majority of the elevation is clad with Cor-Ten steel sheets, introduced as a rain screen façade, which was selected for its resemblance to the local rusting agricultural buildings. The home has also given careful consideration to glazing in order to collect light and focus on distant views outside of the quarry — allowing light to penetrate the building given its dark habitat. “It is a project that speaks a certain honesty in its materiality,” concludes Kristian. “It expresses a way of living simply and authentically that really appeals.” 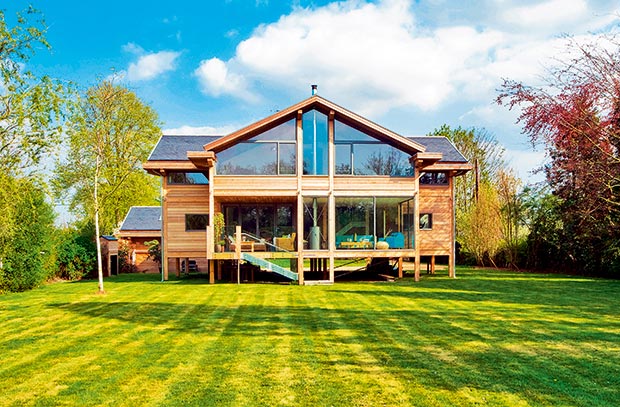 While idyllic river views can make a plot considerably desirable, the idea of having your new home be the subject of many a flooding disaster is reason enough to steer clear of the site all together. Visionary is the word that springs to mind however with this stunning contemporary home courtesy of architect Chris Tapp, whose client – the well-known face behind many a television homes series, Julia Kendall – wished to create a low-impact home that responded to its beautiful site on the River Thames.

The plot was prone to flooding every year, and so the Environment Agency dictated that any new build have its ground floor be at least 300mm above the level of the highest flood expected in the next 100 years. Architect Chris Tapp’s solution was to raise the house on timber posts above steel piles which have been screwed into the ground at 8.5m deep. Then, with the house out of water’s reach, an entirely different – and innovative – solution has been adopted for the garage. Avoiding the use of unsightly ramps, the garage structure is linked to a float-switch which senses rising water and, using mechanical screw jacks powered by an electric motor, lifts the entire garage 1.5m off the ground to protect the structure and the contents inside. 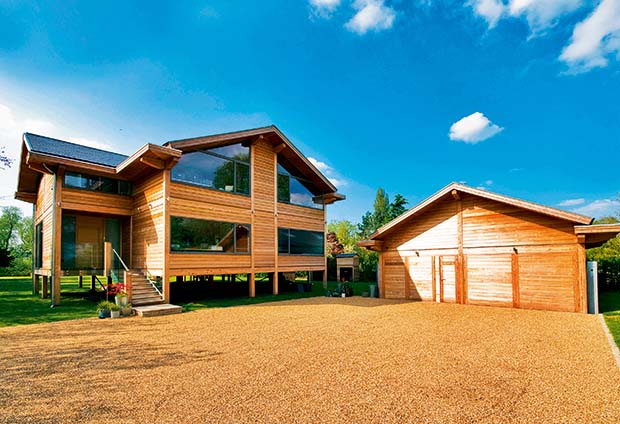 The finished 350m² home is built of glue laminated Douglas fir post and beam construction with SIPs for the walls and roof, is clad in low-maintenance western red cedar, and finished with a Spanish slate roof. The interiors boast open plan living that, thanks to the home’s raised elevation, makes the most of the views, and the home features four guest bedrooms as well as a superb large master suite. With the low-impact brief, the property also benefits from an energy-efficient, airtight envelope, as well as underfloor heating and a water-to-water heat pump. The property really is testament that, with good design, a home can be built on almost any plot.