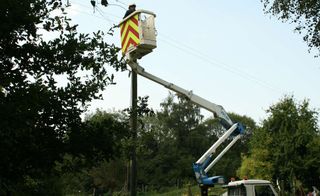 It is definitely beneficial to have mains electricity on your site as early as possible (although you can manage for some time with generators or hand tools if this is not possible). But how do you go about setting this up?

How do I get an Electricity Connection?

Apply for a quotation for a new connection from the distribution network operator (DNO) responsible for electricity in your geographical area as soon as you have plans of your proposals, including a site and location plan. The application process usually involves filling out an online form.

Connection is not cheap, and it’s best to budget for it as early as possible. The quotation will be time limited, too, so be aware of the lead times that are required. Nothing will happen until you pay for the supply in full. Once you do, aim to stick to the DNO’s timetable.

Once you have a quote you will be given the name of the person who will be handling your project. Make friends with that person. They may be able to smooth the passage of the contract and help with transition from distribution to supply company where liaison is necessary.

How Much will it Cost?

It’s very difficult to predict as each site, even on the same street, will be different. You need to be aware of your situation before estimating the costs involved. Take the following examples:

Site one is a new bungalow on an unmade lane on the outskirts of a village where the supply is overhead and the pole is within the plot. The supply is brought down the pole and then routed underground in trenches dug by the self builder. This could cost around £450.

Site two requires a single phase supply off the main line which already runs over the self builder’s plot. The work involves installing a new pole with a mounted transformer (on the self builder’s own land) then running the cable 35m to the house. The quotation given is £7,000.

Site three requires supply in a rural position, entailing a 60m road dig with the distribution company digging as far as the boundary. This could cost up to £10,140.

Which DNO Should I Approach for a New Connection?

The UK is divided into regions, with various DNOs responsible for maintaining and supplying electricity in these areas. The companies are:

The names of these companies do not necessarily reflect the regions or areas of their operation. You can see maps of their operating areas at nationalgrid.com. Check which DNO you come under, as there are bound to be borderline anomalies.

Do I Need a Wayleave?

For that, a wayleave is required and in most cases permission will entail payment of a ransom. The distribution company will quote you for their work but will not and cannot carry out that work until the wayleave is agreed and paid for by you.

The amount paid for a wayleave will depend largly on whether there are viable alternatives to crossing land owned by other people. In the worst case, bar a total refusal, the amount required can be as much as one third of the uplift in value due to the wayleave making the plot suitable for development. Be aware that you cannot force or require a private individual, owner or company to do business with you.

Bringing the Supply to Site

Some companies leave the fuse out and loose in the box so that there is no live end. You need to know where that fuse is, as it may cause delays if the supply company has to source one when they come to install the meter.

The DNO will supply a quote for bringing the supply to the meter position of your property. It will require that its supply terminates in a lockable box or meter box that you supply, which can be mounted on a stout pole or built into a wall in the eventual position where it will remain.

If the supply is coming down or across highways, or other land, it is normal for the quotation to include the road dig element as far as the boundary. However, you will be responsible for digging any necessary trenches within your site to the meter position. The DNO will supply and lay the cable from its main to the meter box, where it will terminate at a 100amp fuse, which is fixed in the box.

If the mains in the street run overhead, the distribution company may choose to bring the supply to a new pole on your boundary. From here it will come down the pole and run underground to your property. This may be cheaper than a road dig, but it’s not always possible or convenient, and levels and heights may mean that it is not possible to cross a highway.

To make savings, you can carry out the excavations yourself if you, or your contractors, have the necessary insurance. Normally there’s not much saving to be made with a road dig (you’ll need to employ a Highways-approved contractor), but it can be advantageous to dig across, say, Forestry Commission land where there are no traffic issues and the reinstatement is straightforward.

What do the DNOs Provide?

The DNOs will usually provide the cable, and accoutrements, from the mains to the 100amp fuse at the meter position, and will determine the cable size. Generally, if the supply is having to run more than 40m, or if more than one property is to be supplied, they will have to move to a thicker 80mm cable.

The self builder can opt to install ducting in the trenches within their site but this must conform strictly with the requirements of the DNO. For 25mm cable, this is purpose-made 100mm black ducting. All ducting and cables must have warning tape laid over them prior to backfilling.

Where Should the Meter Box Go?

The best position for a meter box is on or near the front of the house so that it can be read without the need to enter your private amenity space. They are unsightly, though, so if you can get it around the side, but still accessible, that is often better. Built-in boxes, which can be painted so that they don’t stand out so much, are preferable to surface-mounted boxes.

The rise of the smart meter means that the need for the traditional meter box may die away soon anyway.

How Do You Get Power?

You will need to contact a supply company who will arrange for a meter to be fitted. The process for a temporary supply is that the supply company installs a meter and connects this to a temporary consumer unit within the box, which your electrician will have installed, leaving tails.

These tails are then connected to the meter by the meter installers and they, in turn, connect the meter to the supply via the 100amp fuse left by the DNO. The temporary consumer unit can then provide a supply to a power socket or sockets located in another lockable box.

The supply can only be re-routed into the main consumer unit of the house once the electrical installation is complete and certified by a qualified and Part P registered electrician.

Who are the Supply Companies?

The supply companies are completely different from and have little or no association with the DNOs. These are generally considered the ‘big six’:

It is very difficult to get some of the ‘big six’ to install a meter as their systems are geared towards premises with pre-installed meters. Therefore, it can pay to deal with one of the many smaller or independent suppliers who are often a lot more flexible and helpful. There are lots out there, so do some research and read others’ reviews when choosing a supplier from outside the ‘big six’.

Can I Go Off Grid?

Yes. A few self builders do choose to go totally off grid, using renewables instead of electricity from the National Grid, including Linda and Justin Tyers (below). They self built a straw bale and timber house in Exmoor National Park for just £67,000.

The couple are now virtually free of utility bills. “It was going to be very expensive to connect to electricity, so we decided to go off grid,” says Justin. PV panels generate the couple’s electricity, with a large bank of batteries providing power at night and on duller days. There’s a generator too, which Justin bought for £3,000 early on in the project to supply electricity to the site. This now offers a back-up solution should they ever need it.

An Esse wood-fired range is used for cooking but also supplies hot water and space heating when it’s running in the winter. In the summer months, an immersion heater supplies hot water and the couple use a LPG hob. There’s also a woodburning stove which provides additional heat. What’s more, when the PV panels charge the batteries to 100 per cent, the system automatically turns the immersion heater on — the surplus energy heats the water.

The couple admit that off-grid living does require some consideration. “The key really is to do those power-hungry things – running the washing machine, power tools, the immersion heater, and so on – on a sunny day and the panels will take care of the power needed in real time,” says Justin.