Viv and Mike Edwards have built a stunning oak framed country house where everything has been designed on a grand scale.

First-time self builders Viv and Mike chose an extremely ambitious project on which to cut their teeth: building a country house measuring an impressive 790m² on a beautiful plot in the Hertfordshire countryside.

The couple and their sons had moved into an unremarkable 1950s six bedroom house on the site which they hoped to renovate, but later changed their minds. 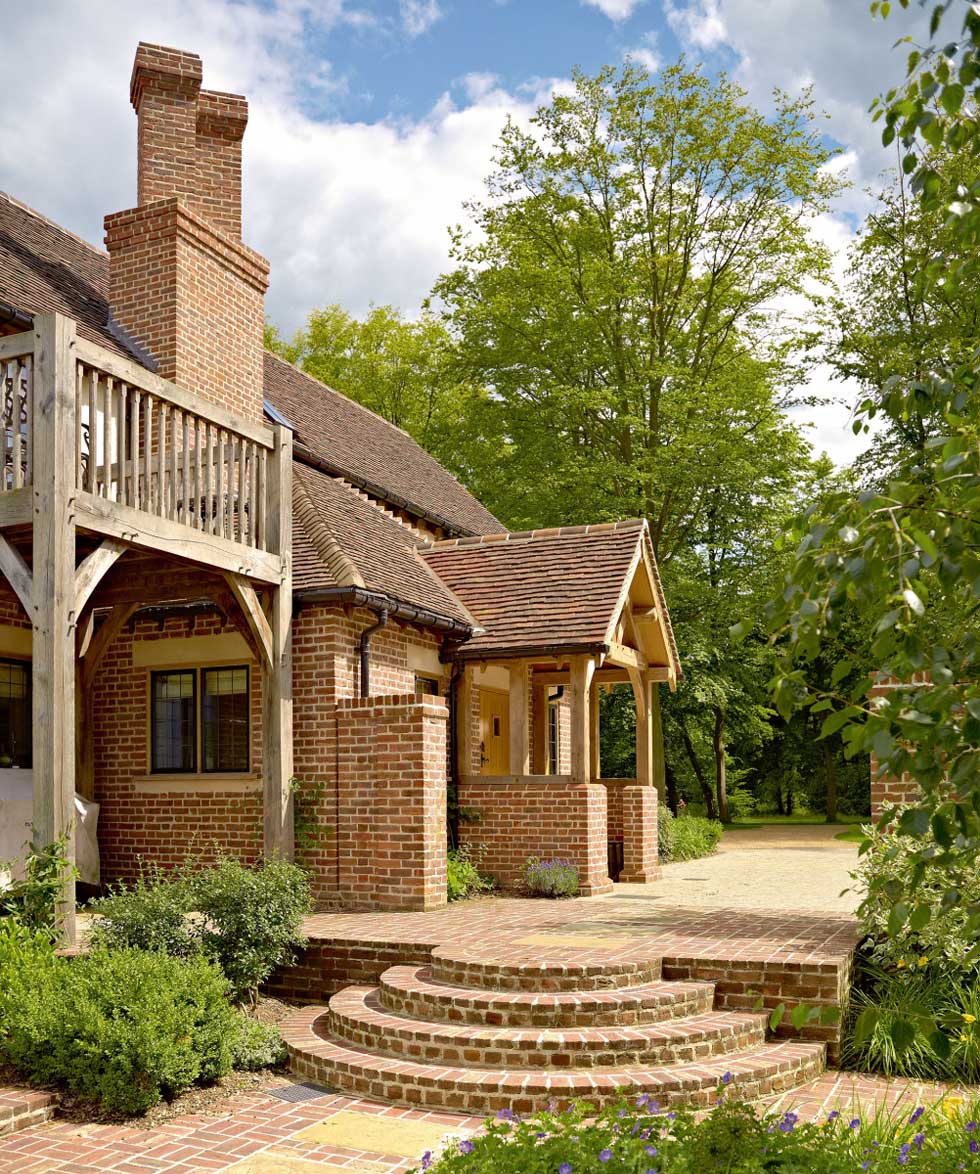 An oak made porch provides a welcoming entrance.

“After about six months of living in the existing chalet-style house we started to think that the plot deserved a far better property, and talked about replacing it with a new build,” Viv explains. “We looked at various options, but none of the local architects we contacted came up with anything particularly exciting. Then we met Jeremy Rawlings at one of the Homebuilding & Renovating Shows and immediately clicked.” 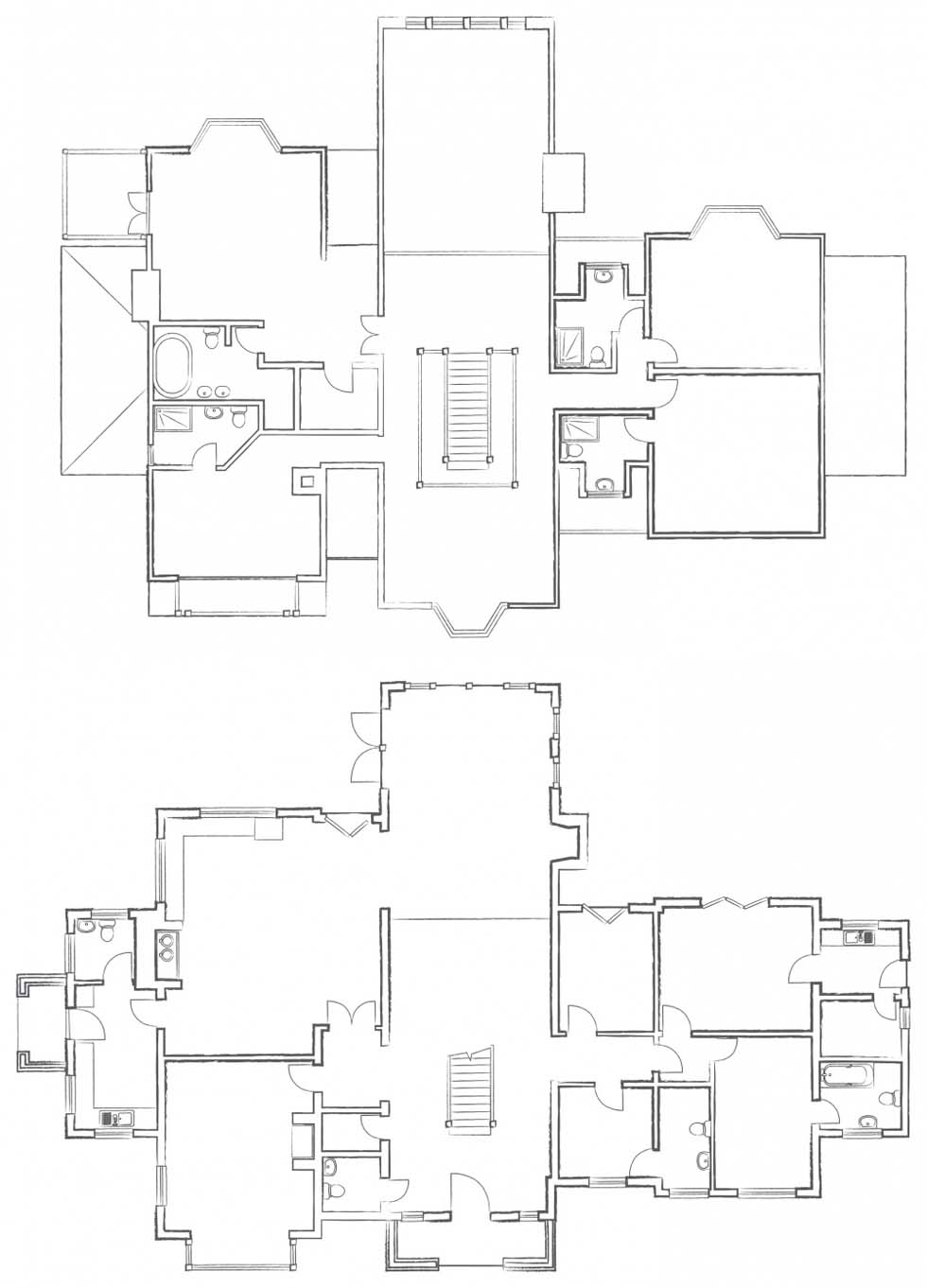 Jeremy Rawlings is an architect recognised for designing British period-style homes with a blend of both traditional and more open American floorplans, who produces lifelike watercolour illustrations of his designs. “We’ve always preferred the character of older properties and Jeremy’s previous projects were really inspiring,” Viv continues. “The new house was more or less restricted to the size of the existing building’s footprint, but other than that we gave Jeremy a fairly free hand with the exterior design. Seeing the drawings in colour really helped us to picture how it would look.”

From the start the decision was taken that the house would be oak framed, and the lofty ceilings now enable the internal oak timbers to be showcased and enjoyed throughout the interior. “We spoke to a number of oak framing companies and particularly liked Oakwrights, who couldn’t have been more helpful,” says Mike. “Once we’d made that decision we went to visit quite a few of their completed and ongoing builds. Looking at other oak framed houses helped us to make choices about our own design and emphasised the fact that we wanted vaulted ceilings in all the bedrooms, as well as in the main entrance hall and living room, to create real wow-factor.” 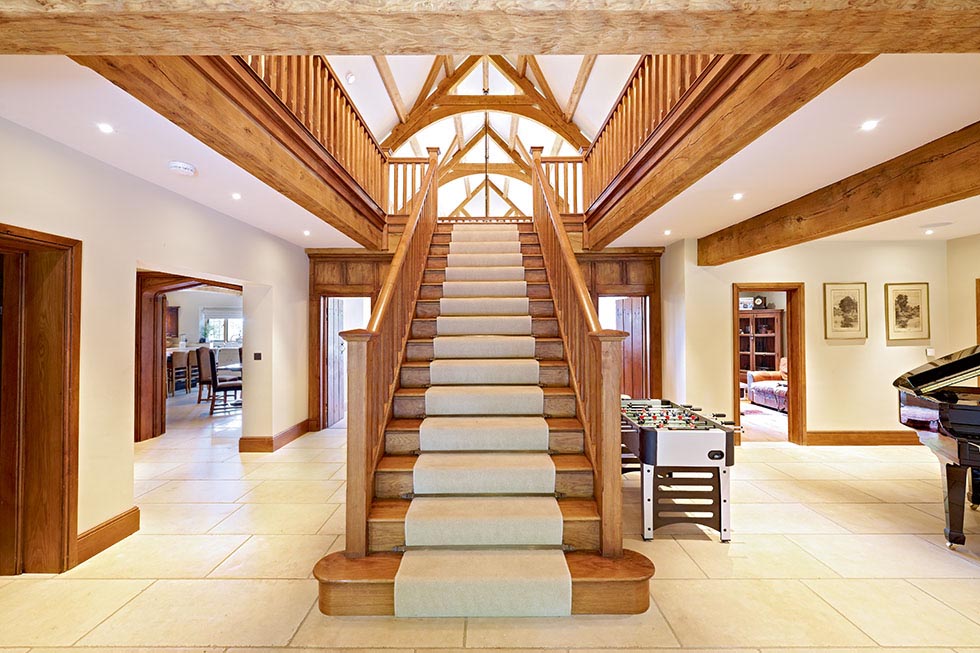 This decision did inevitably limit the number of rooms achievable upstairs, but with so much space to play with there are still five bedrooms in the main house and an additional one bedroom self-contained flat too. The main entrance hall opens into an impressive living space, overlooked by a gallery, and featuring a double-height window onto the garden.

An existing railway tunnel runs along one edge of the Edwards’ nine-acre plot, which had caused vibrations in the previous property. Mike researched the problem and sourced anti-vibration matting, which sits on top of the foundations and provided an expensive but effective solution. Watching the Oakwrights team erecting the frame proved to be an exciting stage in the build as the huge timbers were lifted into position and traditionally jointed and pegged in place. The crane was visible for miles around and the enormous frame took 12 weeks to construct, after which a building contractor completed the project.

“We worked with our builder to find other tradespeople and I did a huge amount of research online for things like the kitchen and bathrooms, and became really passionate about the interiors whilst Mike concentrated more on the exterior,” says Viv.

“The amount of choice was overwhelming and we lived and breathed this project, but we plan never to move house again and were determined to get everything right,” she adds. “Even now, after living here for three years, I still get a buzz when we arrive home.”