When Sheila and Jon Osborne made the decision to move back to the UK from Dubai in 2005, they knew they wanted to return to Hampshire, where they’d lived previously. They were already familiar with the area and sought a spacious property that could become their new family home.

“We bought ‘Chalfont’ as we loved the location. It had already been extended at the time and we liked the open plan kitchen area and the south-facing garden,” says Sheila. “However, as we lived in it, we found that we weren’t using the house to its full potential and the space didn’t flow properly. So in 2012 we decided to do something about it. We looked at what was on the market, but we had grown so fond of the location that we decided to see what we could do to the house, rather than move completely.”

After selling shares in his business, Jon was confident that the time was right to make a start on the project and approached several architects. After choosing Paul Gallie from WSW Consultancy, who came recommended by a friend, a general specification was agreed, along with a project plan that included the design, planning, construction documents, contracts and project management.

The architects put the project out to tender and came back with several quotes from local builders, choosing Moseley Green Bicknell Brown (MGBB) Services Ltd for their good reputation.

The couple had a broad idea of what they hoped to achieve. “We wanted the kitchen changing round to face the garden and for it to be more open plan,” Sheila says. “Before, we spent all of our time in the kitchen, dining room and snug area, which was all in one room, so we never really used the rest of the house apart from at Christmas and Easter when we had friends and family over.”

The fundamental plan was to make the whole house more open, creating a better sense of space, while also adding a separate lounge and a new orangery. “As we do a lot of entertaining, we wanted the kitchen to flow into the garden, which is why we opted for bi-fold doors leading out from the orangery and the kitchen. We also wanted to change the layout upstairs as a couple of the bedrooms were fairly small, and we required four double bedrooms and two new en suites, which could be done by utilising the space over the garage,” Jon explains. 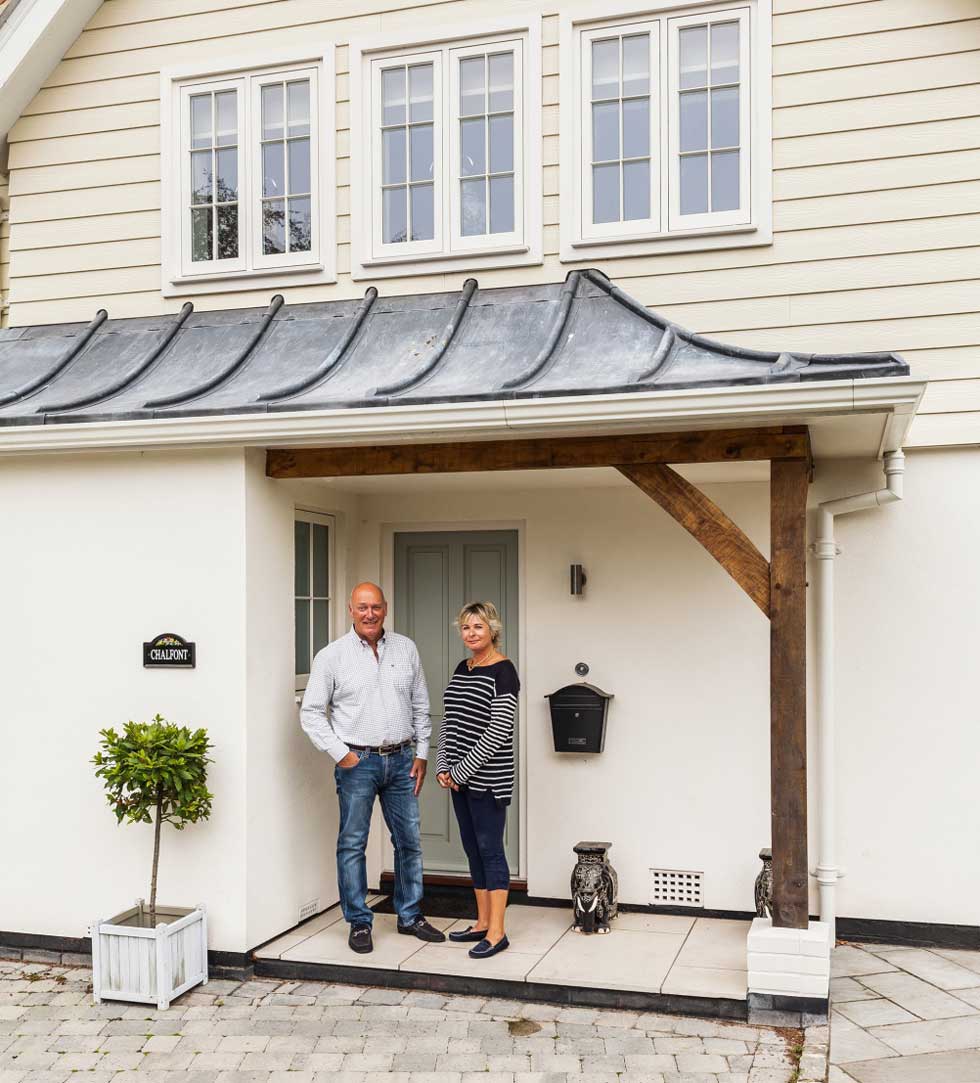 The existing property has been rendered and clad in timber in a neutral colour palette to evoke New England style. New sliding sash windows from Bereco have been installed, as has a new oak frame porch and a new extension over the double garage

Once the build got underway in April 2013, the Osbornes made the decision to head to their holiday home in Spain for the duration of the project, leaving the builders and Paul the designer to get on with the task at hand.

“We wanted to give them the space to get the work finished,” explains Sheila. “We’re pretty flexible, so they would Skype us and send videos from the site to keep us in the loop. I also came back to the UK a couple of times to check on the overall progress.” 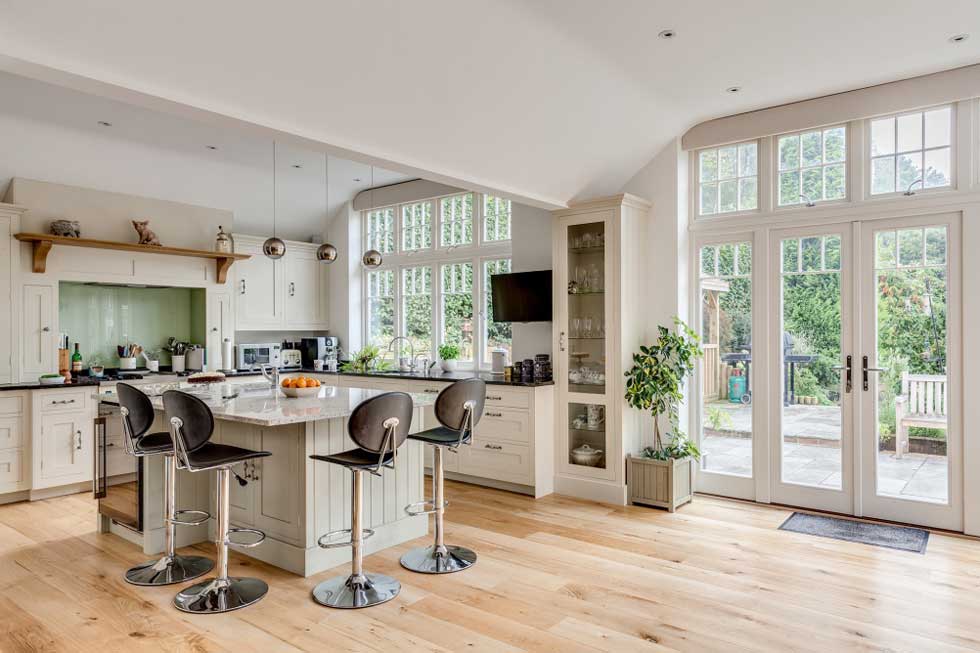 The new kitchen design from Harvey Jones mirrors the neutral palette of the exterior, while the opening up of rooms to the rear allows this space to flow into a dining and sitting area. This open plan arrangement is further enhanced by the continued use of wood flooring from Coomers, used throughout this section of the home

Charlie Brown from Moseley Green Bicknell Brown (MGBB) Services Ltd acted as project manager, working alongside Paul to keep the build on track. The company managed the necessary planning applications and building contracts needed for the new orangery and the bedroom and en suite over the garage too.

A further planning application was then needed when the couple chose to render the old brick exterior of the house. “We hadn’t intended to render the whole house, but the designer recommended it and we’re so pleased that we did as it really adds to that New England look that we wanted to achieve,” explains Sheila.

“The design of the exterior always needs to reflect the target value of the house,” adds Paul Gallie of the new façade. “As the existing brickwork on Chalfont didn’t reflect its value, we proposed an acrylic render from JUB to provide the necessary kerb appeal. 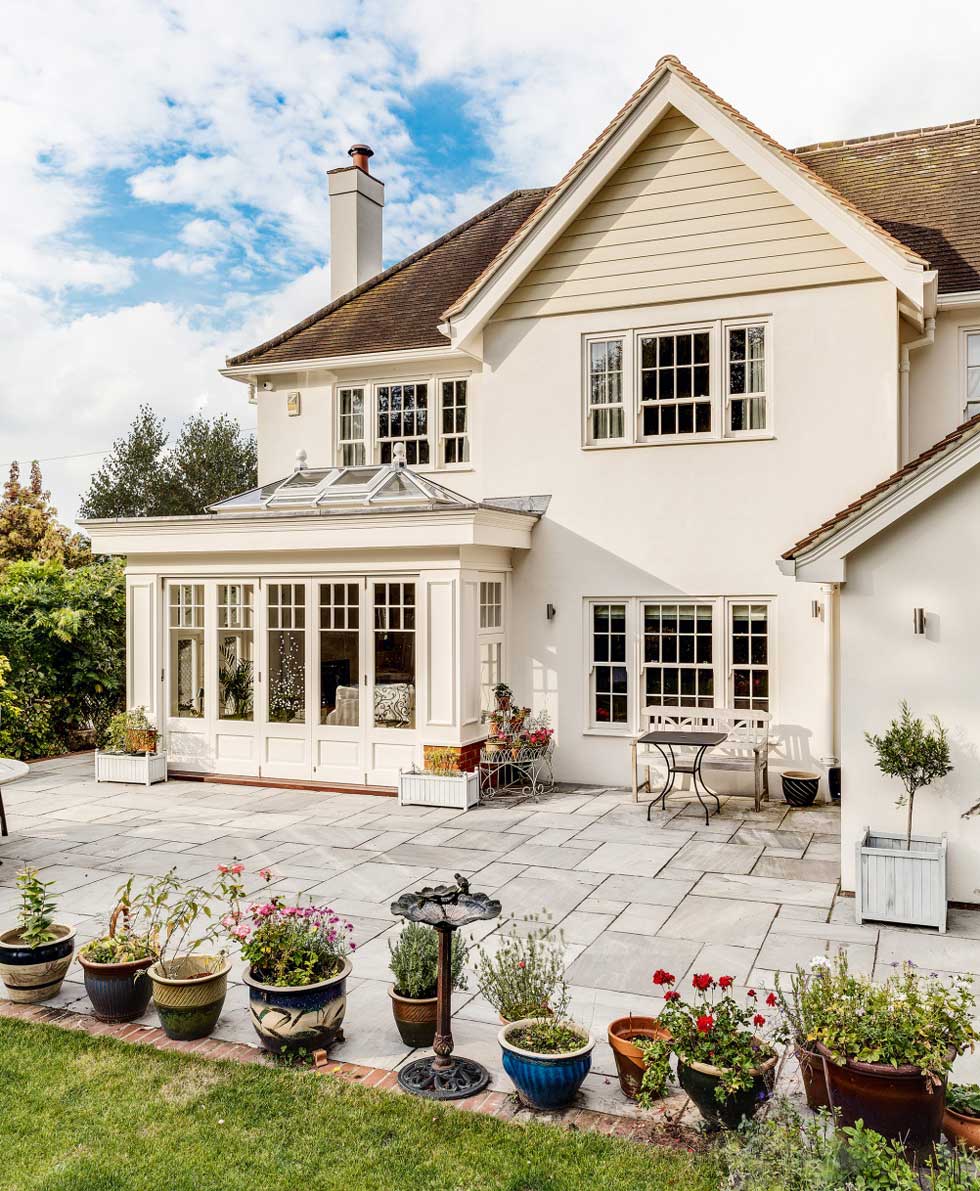 Builders Moseley Green Bicknell Brown also took on the landscaping and have introduced a large patio terrace perfect for outdoor dining and barbecues in summer months. Transitioning from inside to out has also been made easier thanks to the new orangery, in addition to patio doors from Bereco

With the build time taking just four months, the couple moved back into the house in August 2013 and were thrilled with the new layout. “When you go upstairs there’s a real feeling of extra space as the small bedroom has been removed and the ceiling vaulted, which was another lovely suggestion by Paul,” says Sheila. “He thought of a lot of the finishing touches really, like the windows, which were also his idea. The original design wouldn’t have allowed me to leave the windows ajar, so Paul found an alternative from Bereco which works really well.”

Paul takes up the story: “Windows and joinery are an important element to a property’s façade. All of the opening sizes, style and proportions need to be considered from the offset to create a cohesive exterior design.

“Fanlights were initially proposed at Chalfont and while they are highly functional, they were traditionally intended for properties with tall ceilings as they offer a more attractive portrait proportion. As soon as you try and put fanlights into small windows with a standard 2.4m ceiling height you introduce a typical post-war style. Therefore to meet Jon and Sheila’s needs we redesigned the elevations and introduced traditional sliding sash windows with lambs-tongue glazing bars to provide depth and further enhance the New England style.” 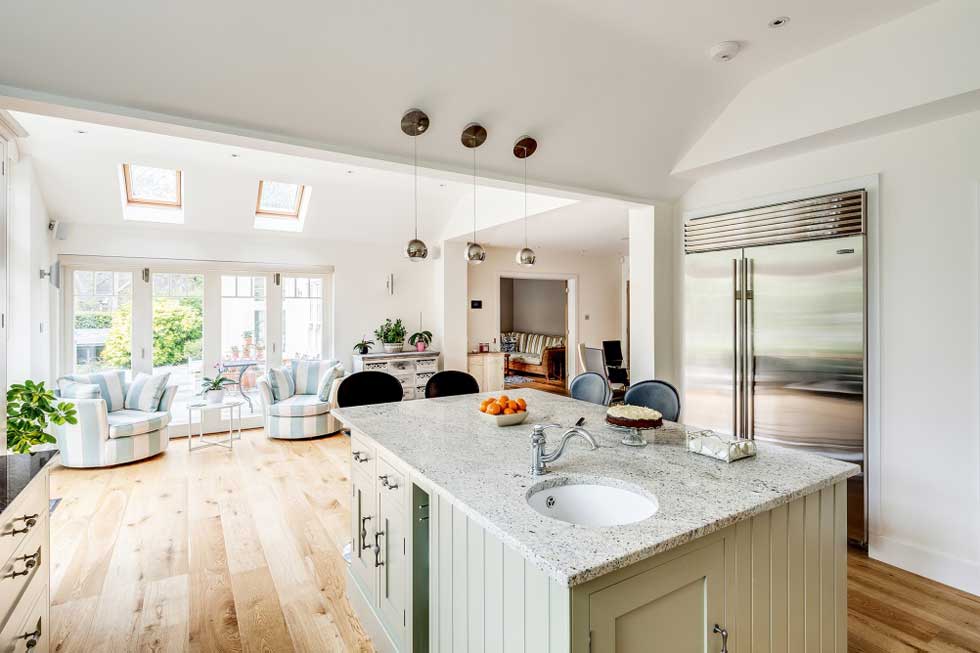 The bespoke orangery from Tommy Rooney of Oakhanger Joinery is an extension of the formal living space and, thanks to its impressive rooflight and triple-aspect glazing offering views of the garden, allows the room to be bathed in natural light

For the couple, the decision to renovate their home was the right one, as Sheila says: “I love the kitchen area — the whole space just works now. All of the natural light and how each room flows into the other means that it feels so homely. There’s not a part of the house that we don’t like. We now also have four large bedrooms, two en suites and a family bathroom, so plenty of space for when friends and family come to stay and we really enjoy living here.”

While the project was finished on time, the couple admit that they did go over their planned budget. “We decided to up the specification and we didn’t want to scrimp on the finishes,” says Sheila. “The actual build and kitchen were in line with what we budgeted for but we chose to spend a bit more on the windows. We’re very happy though and we definitely feel that we had value for money.”

Budget aside, the home’s functionality has improved tremendously, and Sheila and Jon can now use the entire house for entertaining, rather than just the kitchen. “All we need is a bit of a sea view and we’d be very happy!” concludes Sheila.