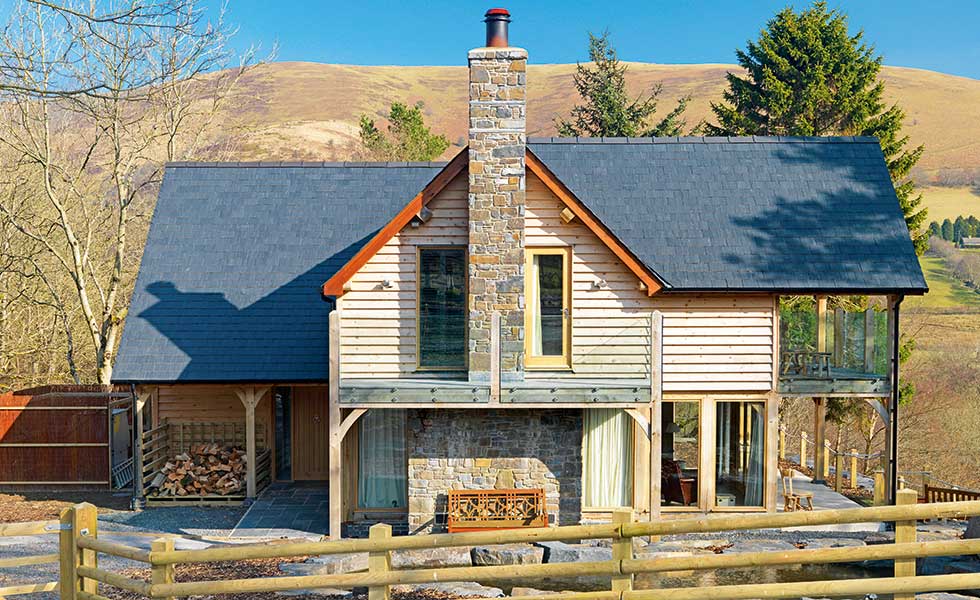 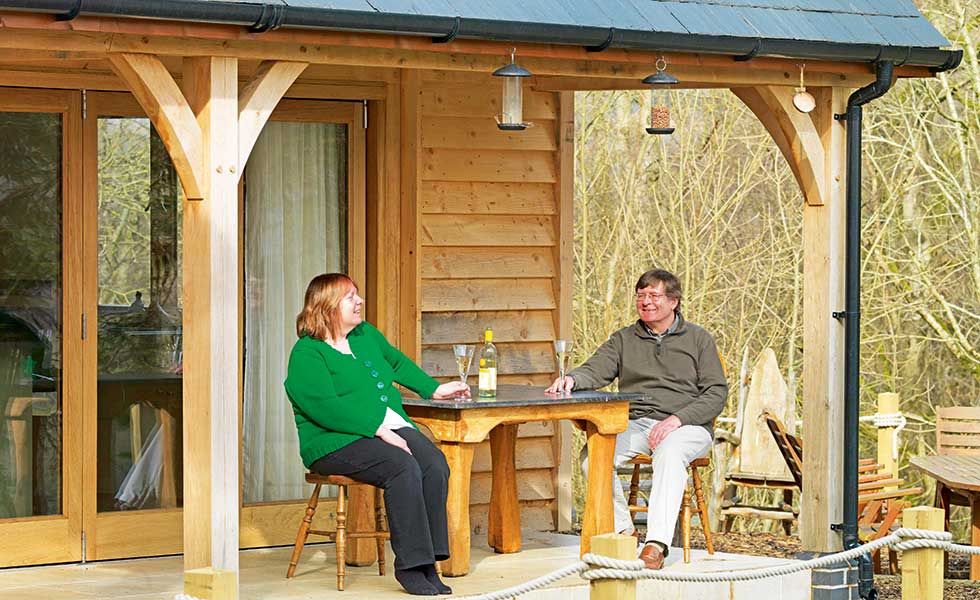 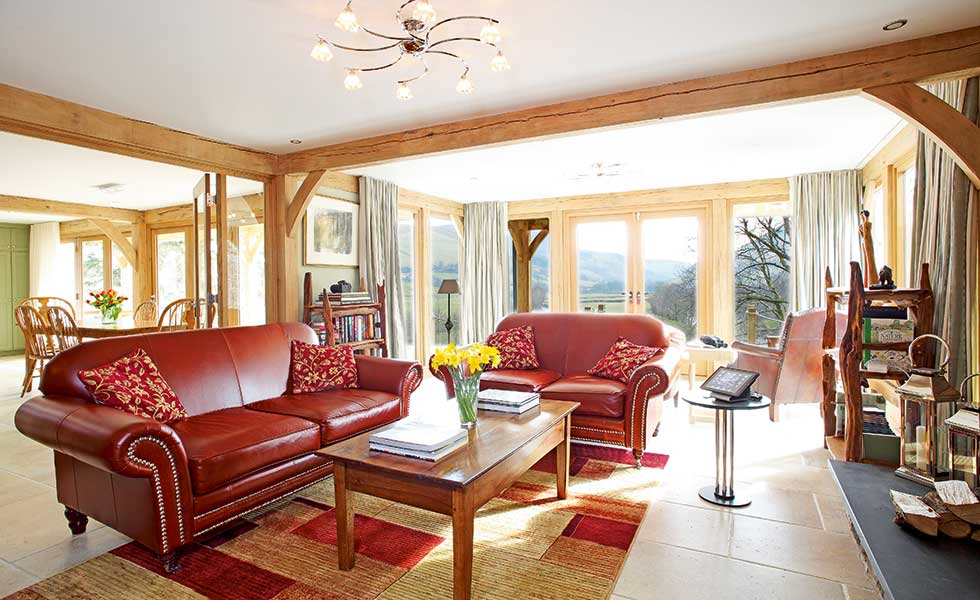 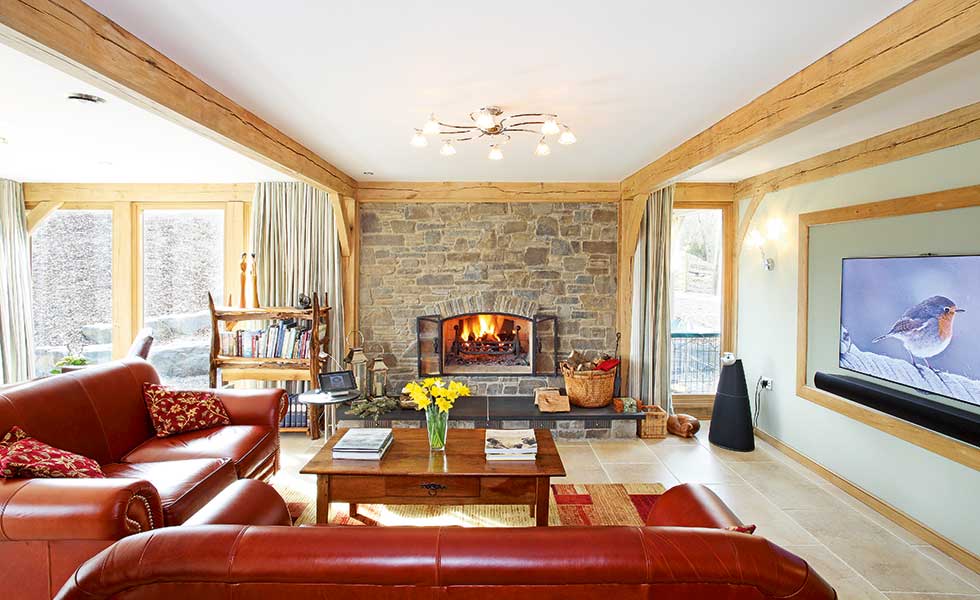 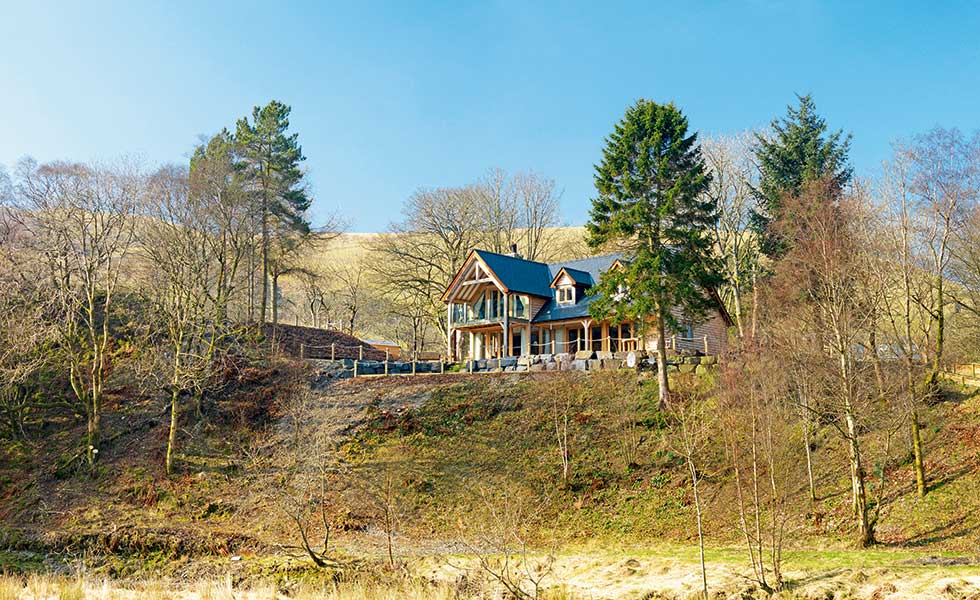 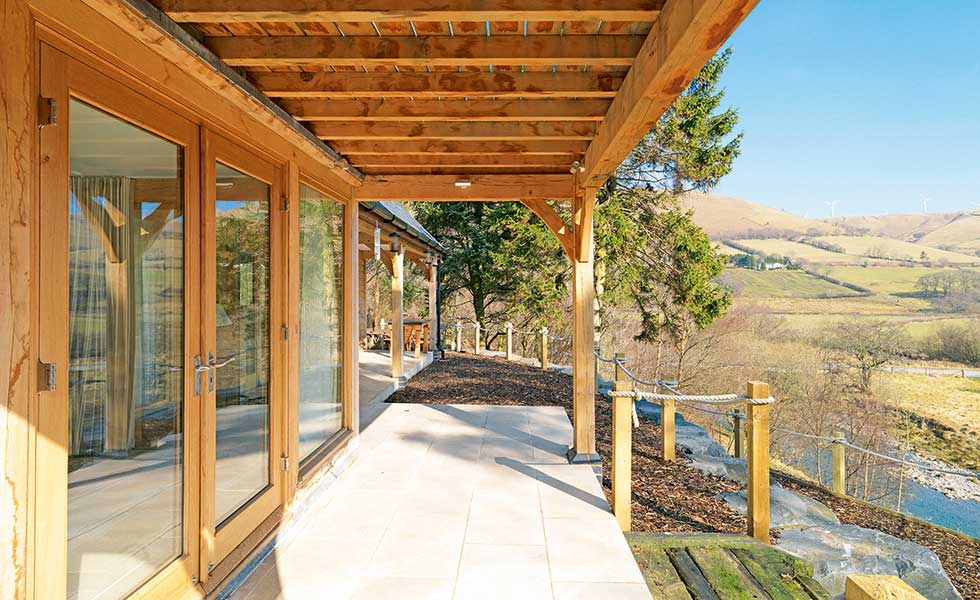 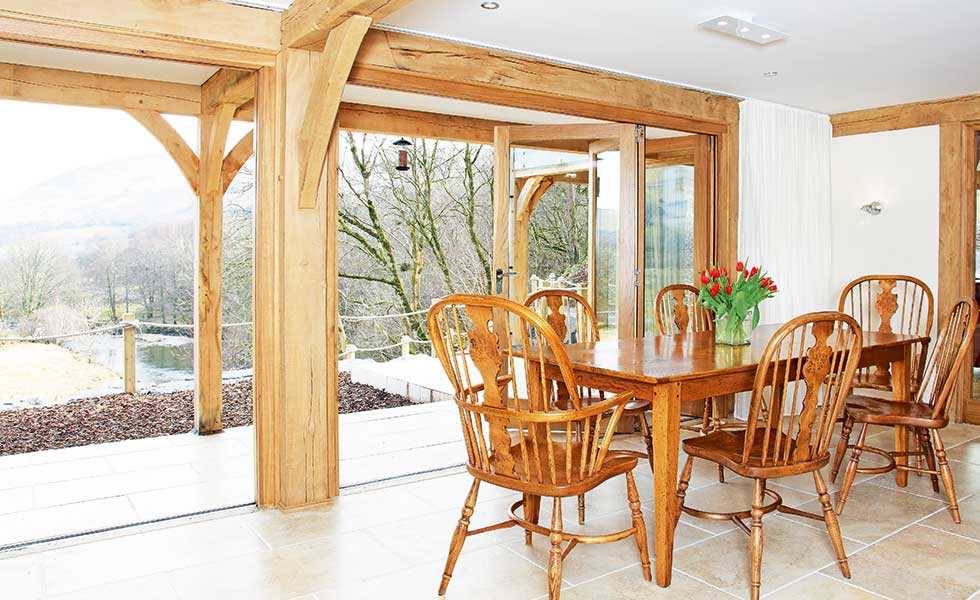 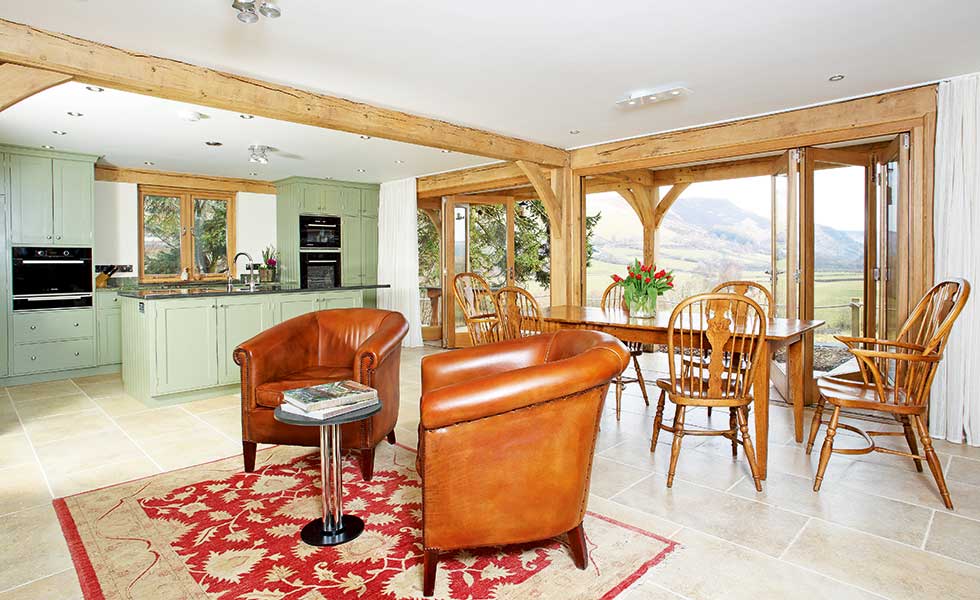 For Rob and Jan Pearce, the perfect home was all about location.

Their dream was to wake up one morning close to nature in a fabulous waterside spot with an amazing view. And their beautiful new oak frame home has made this dream come true.

The design makes the most of the natural surrounding, with extensive use of glass for access to the views.

Furthermore, thanks to a long list of eco technologies, they can happily live with low running costs, and peace of mind that they are doing their part to preserve their beautiful setting.

Rob and Jan were drawn to the plot – with a ramshackle cabin – sitting above the River Wye back in August 2010. When they went to visit it, it was overgrown and they could not see the spectacular views of the valley, nor find a route down to the river below.

Six months later they revisited. Being winter, the vegetation had died back. This exposed the views and gave them the opportunity to design a route down to the river — reservations removed, they knew this was the site for them.

The plot is in a Special Area of Conservation (SAC) as the Countryside Council for Wales deemed the surrounding woods to be ancient woodland. The ground within 20m of the river is also a Site of Special Scientific Interest (SSSI).

The couple enlisted the help of John Edmunds, design director at Welsh Oak Frame. They wanted their home to be all about the location, so it was essential that living space would take advantage of the views with indoor/outdoor spaces. Other than that priority, they wanted low running costs and they were technically downsizing, so they didn’t want lots of bedrooms.

The house’s design allows for principal rooms to open up to the outside. On the ground floor, an open plan kitchen diner opens up on to a veranda through folding sliding doors, then the seperate living room has a large cosy fire for an indoor retreat.

On the first floor, the master bedroom has an en suite and two balconies with glass balustrades for uninterrupted views down the valley, and across to the mountains.

Due to the sensitive nature of the protected site, they expected some resistance in the planning part of the build. Fortunately, Powys County Council are familiar with Welsh Oak Frame designs, and their designer, John, had a good relationship with local authorities. Knowing what they were after made the process much easier.

The oak frame house was almost 50 percent bigger than the shack it replaced, but clever design prevailed. The weatherboard aesthetics were in keeping with the shiplap style of the old cabin, and use of local materials ensured the house had the right feel needed for the setting.

Building work began in January 2012, and the first job was to secure the steep slope of the river bank to protect it from erosion. They reinforced it with cuboidal stone boulders from a local quarry, weighing half a tonne each.

After this, the rest of the build was very straightforward and the house was finished in 9 months. The only hurdle was making the water from their newly dug borehole safe to drink. They had to install a filter to kill bacteria, but this revealed the water to be too high in iron and aluminium. Three water filters and £600 in water tests later, they had solved the problem, but this added expense had not been factored in to the budget. Another financial surprise was the cost of all of the small details like light fittings and switches which cost about £4,000.

The site had no mains gas and they wanted to keep their bills low. Insulation was key, then Rob spent months researching available eco technologies.

Their 18 solar PV panel array cost them £12,000 and is expected to generate 3,400kW of electricity each year. With Feed-in Tariffs they get 40p back for every unit of energy they produce, and have worked out that they will get back what they paid for their PV panels in just eight years. Income from energy generation has exceeded what they’ve spent on bills despite a bad winter and poor spring in 2013.

In October 2012, Rob and Jan made the move from Chester to their new home.