Nick and Debbie Ayton’s luxurious new oak framed house has been designed for modern living, with a basement providing additional space for the whole family.

Many people will recognise Nick and Debbie following their appearance on the popular TV show Wife Swap. The couple were described as ‘self-made millionaires, living the capitalist dream in their four bedroom Surrey mansion’, and Debbie duly traded places with a freegan Jesus Christian who scavenged for food from supermarket bins and lived in a camper van.

What the programme failed to point out was that, in order to achieve their stunning new ‘mansion’, Nick and Debbie had already become familiar with life in a mobile home. The couple and their four children – Max, Arnie, Obie and Darcy – spent a year camping out in two trailers on site prior to building the house, and are certainly no strangers to hard work.

“We’d never built anything before, but the 1960s bungalow we’d been living in for the past ten years was feeling increasingly cramped,” explains Nick, director of a technology business. “Haslemere is an expensive commuter belt, though, and we simply couldn’t afford to buy a large enough house here for us as a family. The solution was to look for a plot of land to build on.”

A two-year search led to the couple purchasing a small, derelict bungalow on the outskirts of Haslemere, with the hope of replacing it with a large family home. Situated on the edge of Marley Common, within an Area of Outstanding Natural Beauty, the private and elevated site enjoys fabulous views but is less than an hour’s train ride away from Central London.

However, no planning permission existed to replace the 120m2 bungalow which stood on the plot, and the property had no central heating. In fact, it was so cold and run down that the Ayton family decided to move into two mobile homes in the garden while they waited to secure planning permission for a new house.

The local planning officer had indicated that a traditional Sussex barn or a Wealden-style house would be favourably received, so Nick and Debbie spent a great deal of time investigating the options.

“We decided that a barn-style house could actually feel quite dark, because this is such a densely wooded area, so we chose a Wealden-inspired property instead and then set about trying to find a specialist oak framing company to work with,” explains Debbie.

“We looked at all the major contenders, but when we met Tim Crump at Oakwrights, we immediately knew we’d found the right person – he’s so passionate about what he does. We saw the workshop and the precision of the frames, as well as visiting a number of their houses, and the quality was just so impressive.”

Determined to avoid a forest of intrusive upright timbers, which would break up the predominantly open plan living spaces, Nick and Debbie set the company a demanding challenge to design an oak frame with the bare minimum of upright structural supports.

Step inside the arched oak entrance door, however, and there are spacious, open plan areas with high ceilings which are filled with natural light and enjoy views over the garden through the extensive glazing.

Beside the kitchen an enclosed staircase leads down to the extensive basement level, which offers additional space for such luxuries as a home cinema, walk-in wardrobes and an office, as well as numerous service areas such as a wetroom, utility, plant room and even a second kitchen.

Outside, there’s a detached three-bay oak framed garage, which was also designed and erected by Oakwrights, and even a sound-proof recording studio where the children are able play their instruments. “Building a basement and outbuildings was the best way to get the room we needed,” says Debbie.

With planning permission easily secured in just five weeks, the Aytons decamped from their mobile homes to live in rented accommodation off site, allowing the builders to demolish the bungalow and excavate the sloping land for the blockwork basement.

“As first-time self-builders we made the mistake of trusting the experts,” says Nick. “We thought that employing professional project management would smooth the way for an easy build, but they kept asking us what to do and eventually ordered the wrong sized structural steelwork. We terminated our contract with the company after a few months and Debbie then took over running the project herself.

“All of a sudden we found we knew exactly what was going on, and most of the stress disappeared,” comments Debbie.

The oak frame was duly delivered and erected on the basement wall by the Oakwrights team, as planned. Internally, the rich golden oak of the exposed frame has been complemented by a wealth of bespoke oak joinery. A stylish oak staircase leads up to the four well-proportioned bedrooms, which are set into the roof space and feature soaring beamed ceilings and exposed timbers which have been pegged and jointed in the traditional way.

“It was definitely worth putting up with a year in a mobile home to build this house,” says Debbie. “For us, building our own home was the only way to get exactly what we wanted within our budget, and we’ll definitely be doing it again in the future.” 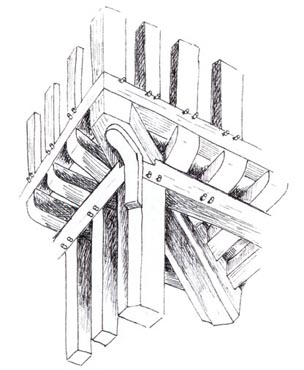 Nick and Debbie made use of the mediaeval building technique known as jettying to make their new oak frame home as authentic as possible. It was an architectural style particularly common to oak frame homes built onto the street as jettying allows extra space at first floor level without obstructing the pavement — really maximising the tight dimensions imposed by the ground floor. Jettying relies on a cantilever system in which a horizontal beam projects forward, resting on a row of joists, supported in turn by jetty plates. Jetty joists were slotted sideways into the diagonal dragon beams at an angle of 45°. Jetty brackets were used (as they are in Nick and Debbie’s example) to further reinforce the beams. The amount a frame can jetty out varies between 300mm and 600mm and depends on the size of the joist used. While the technique is most common to mediaeval oak frame structures, it is enjoying something of a renaissance in contemporary structures (for example, the Whitney Museum in New York).