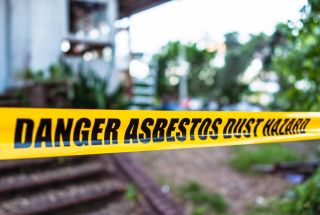 The history of construction contains many examples of materials that were once thought to be the ‘next big thing’ but were later found to be damaging to health. The most notorious of these is asbestos, which was banned in 1999. It was used widely as a fireproof building and insulation material but is now known to cause respiratory illness and cancer.

Crocidolite and amosite were widely used in lagging and fireproof coatings. chrysotile is probably the most prevalent, as it was widely used in cement sheeting and corrugated roofing, floor and ceiling tiles, and as reinforcing fibres in textured coatings such as Artex.

All these minerals were used originally because of their fireproof fibrous nature, which made them ideal for construction applications.

Unfortunately, that fibrous nature is also what makes them dangerous. When inhaled, the spiky fibres can lodge in the tissue of the lungs and resist being displaced, causing irritation and potential sites for cancerous growths.

How Dangerous is Asbestos?

Bear in mind that it is only a danger when fibres are made airborne and breathed in. The Health and Safety Executive advises: “As long as the asbestos is in a good condition and it is located somewhere where it can’t be easily damaged, then it shouldn’t be a risk to you.”

What concerns people taking on projects in old homes where this might be a problem, of course, is how to recognise asbestos and deal with it. And also the potential high costs of having it products professionally removed.

Does my House Contain Asbestos?

Any home built before 2000 has the potential to harbour at least some asbestos-containing materials. Artex was still being manufactured with asbestos up until 1984. Asbestos-cement roofing sheets, gas flues, rainwater pipes and cold-water cisterns were also being widely installed up until around that time.

How to Deal with Asbestos

The HSE website is a mine of information and publishes free downloadable advice sheets on all aspects of removal. When dealing with asbestos-cement roofing, for example, HSE’s advice is to consider leaving the material in place and either cover it over or seal it.

That same advice applies to textured coatings. There were several brands of these going under such names as Artex, Wondertex, Suretex and Newtex — but they all tend to get referred to as ‘Artex’. The coating can be left in place and skimmed over with ordinary multi-finish plaster, or a special coating called Artex Ceiling Finish.

The roof, ceiling or wall in question should then be labelled, to warn future occupants or builders of what lurks beneath. Asbestos-cement or Artex should never be drilled, scraped or dry-sanded, as this risks releasing fibres into the air.

Where to Start with Asbestos Removal

Before you do anything, visit hse.gov.uk/asbestos and acquaint yourself with the advice and legislation. You will see that the rules are different for homeowners and contractors. A business engaged in asbestos removal, for example, might be obliged to notify the HSE about removal, even when it is for asbestos-cement and can therefore be carried out by a non-licensed contractor — so-called ‘notifiable non-licensed work’, or NNLW.

Work with insulation boards, lagging, or sprayed coatings can only be done by licensed contractors, as these are the highest risk materials. This brings us onto the potential high costs of asbestos removal.

Licensed contractors can rightly claim that the work they carry out is hazardous, requires a high level of training, and has high associated insurance and equipment costs. They provide a service that makes buildings safer and as a result, it’s difficult to complain if that service comes at a (probably low £1,000s) cost.