Dumfries and Galloway farmer Neil Gourlay and his wife Mary have built a truly sustainable home using as many locally sourced materials as possible. The home, which is also off grid, in fact generates more energy then it uses and feeds the surplus electricity back into the National Grid.

But it is not only the environmental elements of the design that are to be applauded — their vision for a low impact home has also been met through its design, and the use of materials makes it almost blend into the landscape.

Neil and Mary are the third generation of the Gourlay family to farm in the Cairn Valley. In light of the recent financial crisis Neil decided to take the family funds and put them back into something he had more control over, so he used the money to build a sustainable home for their retirement.

Choosing a location on their 300-acre site was informed by the lay of the land. Gaining planning permission for an agricultural use home, which allowed them to keep a close eye on livestock, was fairly easy and they opted for a position that would ensure the home would be low impact too. The chosen plot has a view to die for, and the home is nestled into a hillside for a limited impact on the landscape.

Locally sourced materials tie the home to the terrain

The main brief to their architect, Mark Waghorn, was for a long-term family home that would be sustainable, carbon negative, warm, airtight, and that would not cost a lot in terms of power and heating. They were also keen that the house would incorporate as many materials from the farmland as possible to help it blend in. 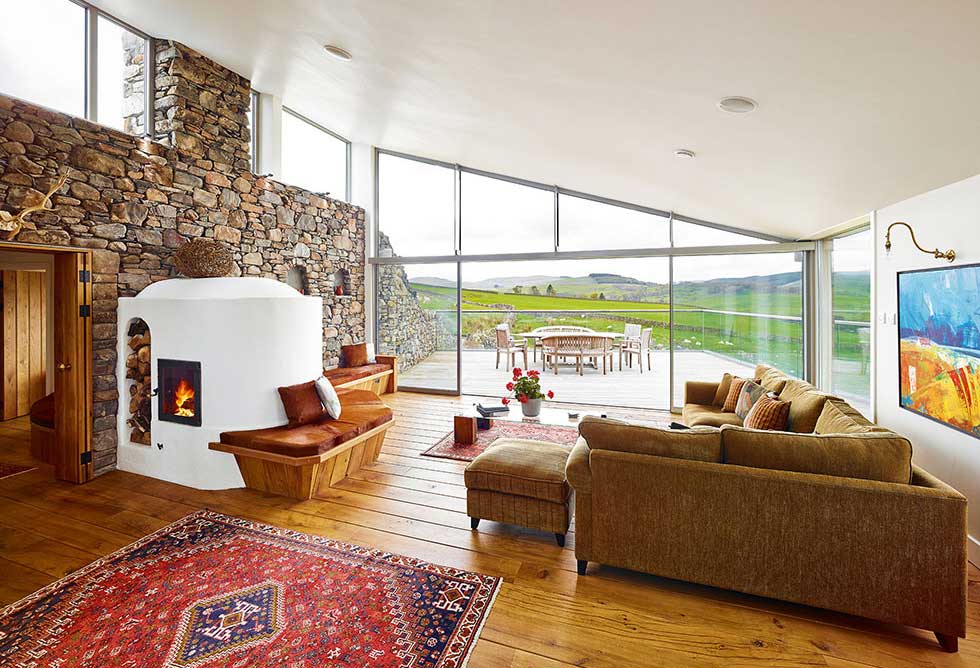 The design was dictated both by the site and the materials available on it. The dry-stone wall which passes through the interior of the house, and makes up some of its external walls, has been built from 500 tonnes of stone collected from the fields. Exterior oak cladding was sourced from the surrounding wind-felled trees and the 150mm thick sheep’s wool insulation is from Neil’s own flock.

Room layout has been influenced by passive solar gain and also the views, so the light filled living space occupies the ground floor, with the bedrooms on the sheltered lower ground floor below. Terraces off the open plan living area and the conservatory offer easy access to outside space.

Expanses of triple glazing work well against the natural pallet of stone and timber — creating a fine example of contemporary organic architecture. Interior finishes include a number of reclaimed items and finishes such as salvaged bathroom suites, and old railway sleepers which have been sawn, treated, and polished by local craftsmen to make up the flooring and furniture.

Finally, turf from the site covers and protects the Sarnafil flat roof. This helps to camouflage the roof, which also has been designed with the same gradient as the slope of the hill. 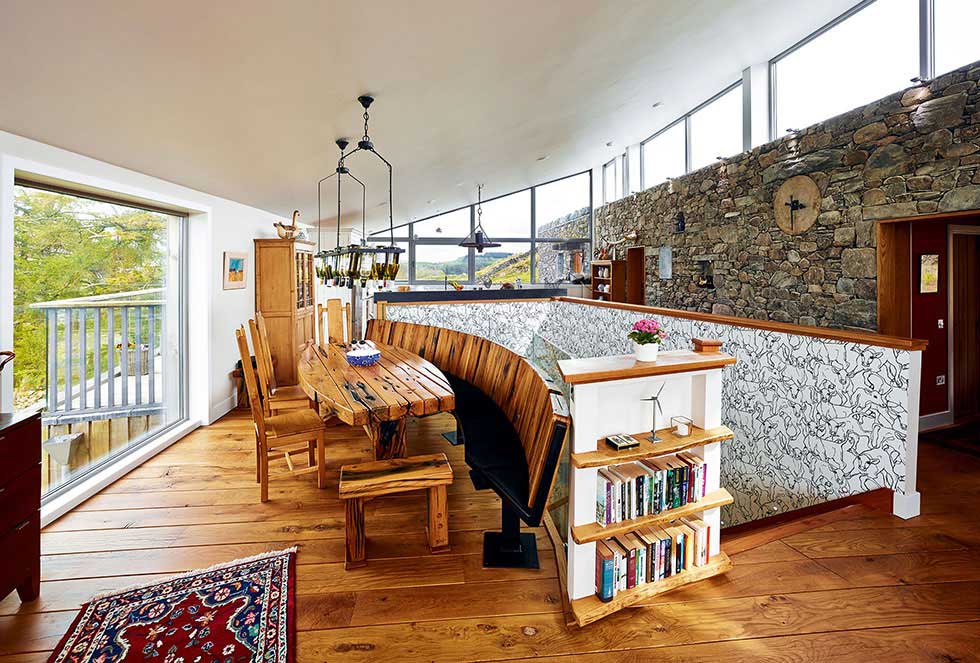 The round clock was made at Neil’s father-in-laws farm in Cumbria using his mill wheel stone. The warm wood flooring is made from reclaimed railway sleepers, as is some of the furniture

Although Neil managed the project (his first major self-build) himself, it took just 17 months for contractor, 3b Construction, to complete the five-bedroom farmhouse. The build included a poured concrete wall to protect from penetrating water, and a steel frame which was needed to take the weight of the turf roof. 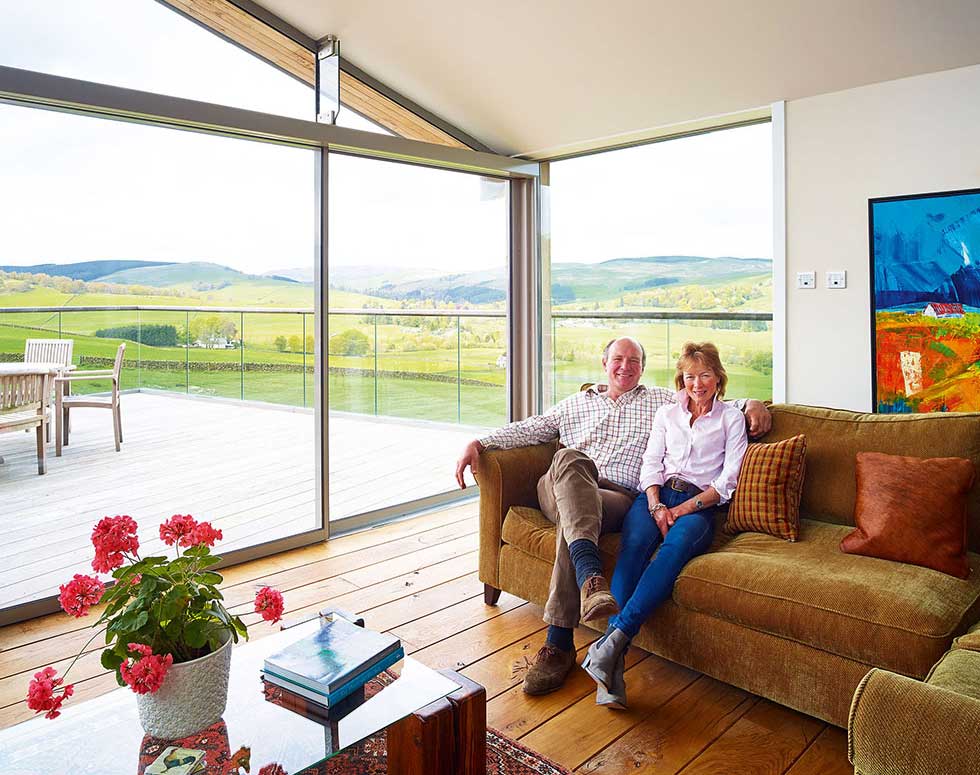 Neil and Mary can enjoy their self sufficient home for years to come, and feel positive about the futureproofing technologies they have specified

To become one of Britain’s greenest self builders, Neil and his wife Mary followed a ‘four Rs’ philosophy to reduce, reuse, recycle and recover. As well as ensuring the home made the most of what was readily available on the land, the first step was to produce a building which is airtight, well insulated and orientated towards the sun.

The home requires little heat as it is, but for the harsher winter months, a comfortable temperature is ensured by their specification of the following:

They also installed solar thermal panels on the garage roof, but these have not performed very efficiently due to the weather. A far more fruitful addition is the 34m-tall wind turbine which generates enough electricity for up to 25 homes, with the excess electricity exported to the National Grid, generating extra income for the farm.

Therefore, not only is their home completely self sufficient, it is also carbon negative, by giving back more energy than it takes away.