We chose a high compression EPS 100 insulation to go under the slab. It’s designed to support structural loads. It came down from Phoenix Specialist Products and was really good to use. The EPS needed to be covered by the damp proof membrane (DPM) which was lapped and taped as instructed. This took time, but was essential to get right, as this would be the main ground based damp proofing under the slab.

I managed to find some great local steel fixers who came and tied all the reinforcement mesh prior to the slab being poured. There is a 300mm step in the slab, which proved tricky for them but they worked it out. There was also a deeper foot that ran the circumference of the raft. We put a huge amount of steel in the ground, in fact it seemed a little over specced, considering it is a single story building. Better safe than sorry though! 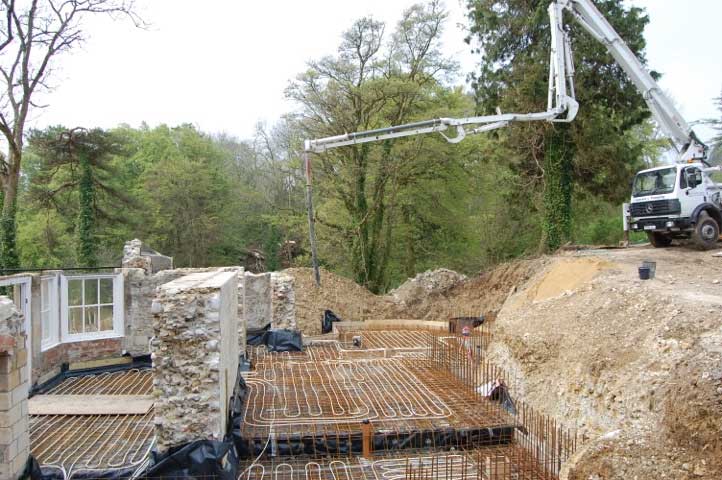 Once all the reinforcement was in place we got Robert Tyres down, our plumber, who had bravely agreed to take on the project. Heating the entire slab is quite common in commercial buildings but not in residential.

We had designed the system with Nu-heat. Their technical guys had been a real help and couldn’t foresee any issues, but Robert and his team had never fixed under floor heating pipes directly to the slab mesh before. Usually it’s fitted within an insulated screed above the slab, once the house is built. I wasn’t up for this conventional approach to heating the house, but I was still somewhat nervous that it all went well. 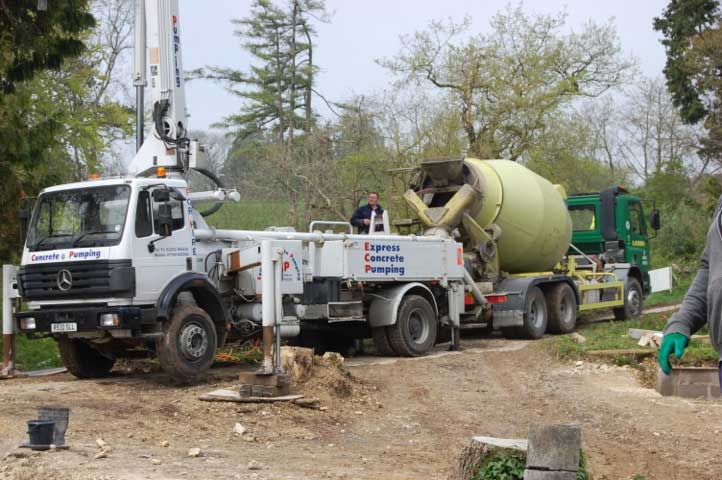 Laying the pipes proved an interesting challenge from both a balancing and zoning perspective, as there were no solid floors to walk on and no walls to denote the zones. It took a day or two to sort out, attach the manifolds and pressure test but we got there in the end. The most important thing was not to damage them when pouring the concrete.

I actually tested how reliant this plastic pipe was by striking an off cut with the back of an axe. It took three heavy blows to split the pipe, which for me, was reassuring. It meant that the force of the concrete poker shouldn’t be a problem on the day.

I did a lot of reading up on concrete pours, because I had never seen one done before. We had to do two separate pours because of the two slab levels. Annoyingly this meant getting the pump down twice. 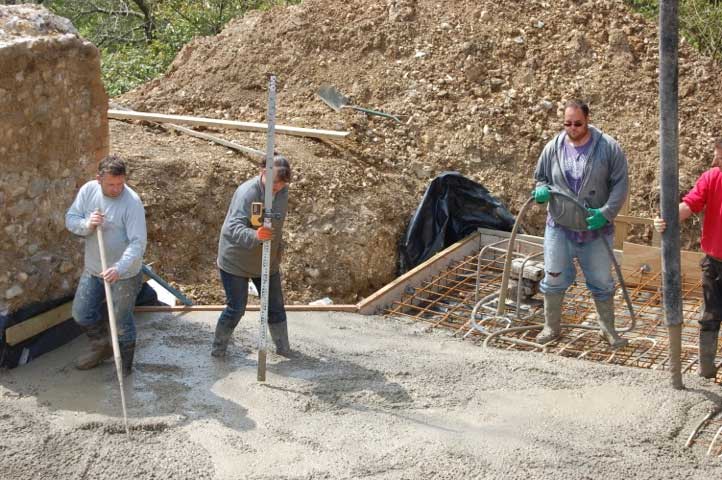 Obviously, we didn’t want it to rain on the day as this can weaken the slab surface. Particularly if you intend to power float the floors, as we did. We had to push the pour back several times to get a weather window that looked good enough. I had to work in the kitchen (frustratingly) on both concrete pour days, so didn’t get to see it happen. But Alice, my wife, took some great pics.

All went well on the day of the pour, and apart from a spit or two of rain on the second pour we ended up with a tidy slab, that was more or less level!