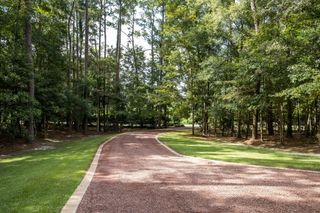 The last thing you would want to do when driving out of your new home is to have to enter a road without being able to see what’s coming in both directions. It’s dangerous, and that’s why the authorities will insist that any new entrance onto a trunk or classified road has a visibility splay — which, even in a 30mph limit will usually mean a requirement to have a clear view of 70m (metres) in each direction.

A visibility splay is formed by measuring to a point 2.4m back from the carriageway in the centre of the driveway or entrance. A line (70m long in the case of a 30mph limit) is then drawn to the right, to a point where it strikes the near-side edge of the carriageway. Another 70m line is then drawn to the left, to a point where it strikes the opposite edge of the carriageway. Any land that is contained within the unequal triangle that is thus formed on the entrance side of the carriageway, must be kept clear, in perpetuity, of any obstruction above 1.005m. If you think about it, the distance back allows for the bonnet length and the height is one’s eye height when sitting in the driver’s seat.

On faster roads or roads of a higher classification, the length of the visibility splay will increase and the curvature of the road may require that the lines in each direction are unequal in length.

If the Visibility Splay Affects Neighbours, They Can Block Your Build

If any section of the triangle required for a visibility splay falls outside the plot’s boundaries, other than on highway land, then the adjoining occupiers must agree to the land being kept clear of any obstruction higher than 1.005m if the planning permission is to be operable. The problem is that there is no way to force adjoining owners to agree to limit what they can do on their premises and they may, therefore, acquire what amounts to a veto over the plot’s development.

What if Next Door Refuses to Play Ball?

If next door plans to erect a shed, fence or hedge within the triangle of land required for a visibility splay, then there is nothing you can do about it except try to negotiate a settlement with them. And remember, this situation could affect both sides of the plot — and two sets of neighbours.

If your neighbours are absolutely adamant that they are not going to allow this development and they are not willing to enter into an agreement in perpetuity to keep the land clear of any obstruction, then you have no alternative but to shelve the development or try to arrange an alternative access.

Negotiate the Cost of Settlement Off the Plot’s Purchase Price

Unless your new neighbours are strongly opposed to any development and will use the situation as an opportunity to prevent your new home from being built, then chances are they will be prepared to negotiate a settlement to allow for the visibility splay.

The usual amount that they could expect to receive, in order to waive their rights over the land and allow the development to proceed, is up to one third of the uplift in value of the plot. That’s one third of the increase in value from a plot that is not able to be developed to a plot that can be developed. In other words, to use easy figures, if, as garden land it is worth £1,000 and as a plot it’s worth £100,000, then the ransom – for that is what it is – could amount to £33,000.

Obviously it’s a huge amount of money and this is exactly why if you’re considering purchasing a plot, you must read the conditions on the planning permission and, if there is one requiring a visibility splay, you should then mark things out on the ground to check that the requirements can be achieved within the plot’s boundaries. And if, when the lines are drawn out, they cross into land outside the ownership of the plot, then you should make sure that any negotiations and necessary agreements with adjoining owners are completed before exchanging contracts on the land.

If any payments have to be made, they must either be paid directly by the vendors or knocked off the price paid for the plot. The vendor won’t be happy about it, but if they don’t then they are left with a plot that cannot legally be developed and which they cannot, therefore, sell at full market price. If you pull out because of their refusal, their solicitors will be duty bound to inform other purchasers of the problem. Usually, simply pointing this out to a vendor will elicit a climb down on their part.