David and Jacqui Allen have reinvented a 1930s bungalow, extending and remodelling it to create a contemporary-style family home — for just £110,000.

David Allen literally got on his bike and started searching the streets for inspiration when he and wife Jacqui realised they wanted to live in a home which was more than just ‘alright’.

“We were living in a standard house on a modern housing development but the more I worked with architects through my job in architectural hardware, the more I realised how mediocre our house was,” explains David. So when Jacqui finally spotted a dated 1930s bungalow with a west-facing garden for sale on a suburban road in Gateshead, the couple knew it could allow them to create something more befitting modern family life.

David negotiated the sale in two phone calls and then approached friend and colleague, Yorkshire-based architect Nick Midgley, to begin proceedings. “I had seen Nick’s work and loved it,” says David.

The high cost of removing spoil from this narrow site with limited access ruled out knocking down the bungalow and building a new home, whilst the existence of underground mines nearby ruling out adding a second storey. 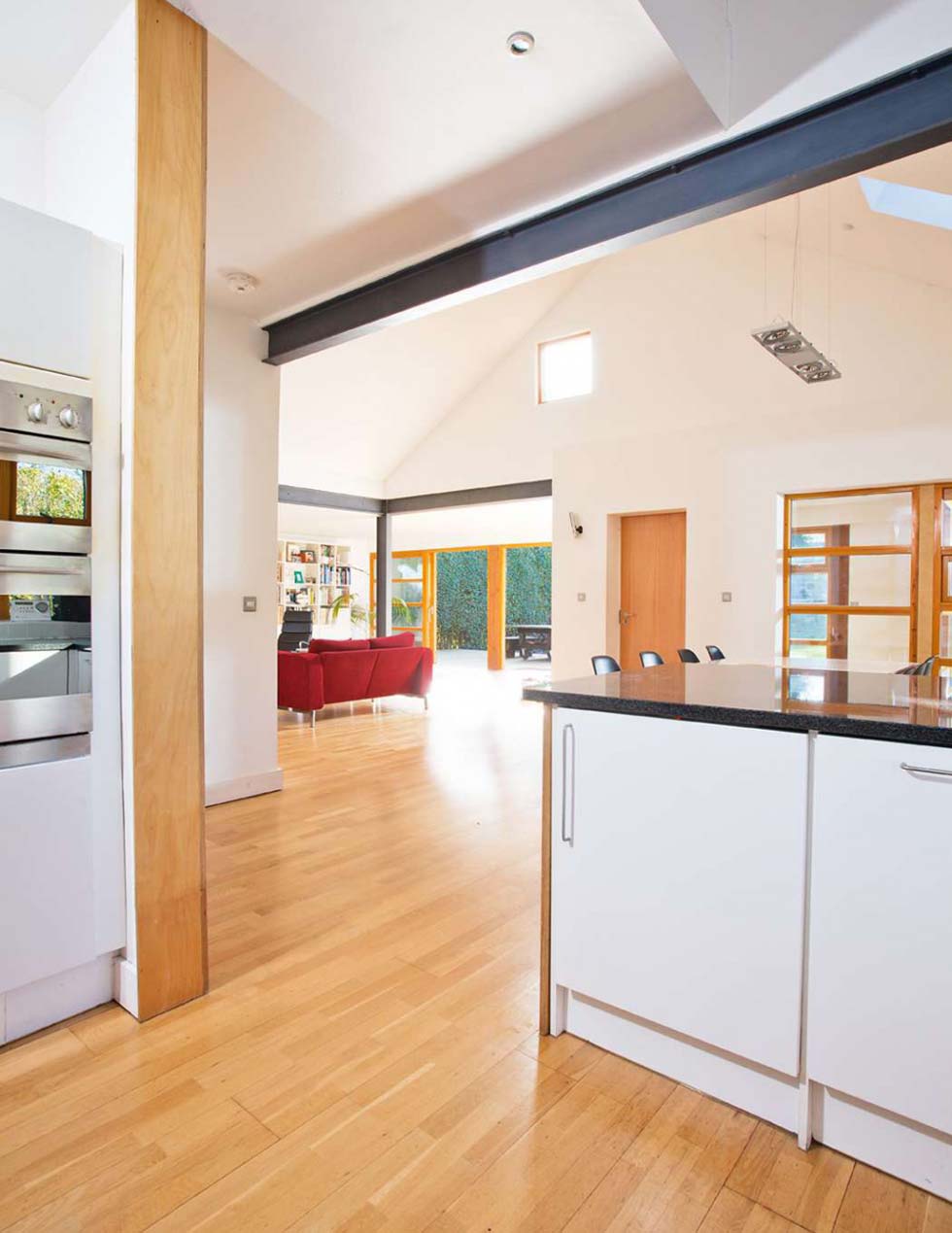 So, an imaginative design scheme and radical overhaul would be the order of the day – the couple and Nick decided to extend the bungalow outwards in two directions, creating a flat-roof wraparound extension which would unite the house and garden, and almost double the living space.

The existing roof would also be removed and rebuilt to create high, open ceilings in the living room and a small multipurpose room in the remaining attic space. The majority of the bungalow’s original layout would, however, be incorporated into the transformation to keep costs to a minimum.

In addition to retaining as much of the original building fabric as possible, Nick’s scheme would draw on basic, inexpensive materials in a contemporary way, helping the couple to remain within budget. “The overriding principle of his design was simplicity, using humble timber, block, render and ply to keep costs down,” explains David. Birch-faced plywood used throughout the interiors now makes a particularly big aesthetic impact.

Four main structural beams have been introduced inside the bungalow to provide support for the new additions, with a single column in the middle of the open plan living area holding up an entire corner of the building. The beams have been left exposed in this living space, adding an edge of industrial chic. Opportunity was also taken during the construction to upgrade insulation levels in the existing bungalow.

Most of the work was carried out while David was working away during the week, so it was down to Jacqui to oversee the site day to day. But the couple agree that it was Nick who pulled the whole project together and ultimately kept it on time and within budget.

“People think an architect is expensive,” reflects David. “But Nick… had the vision and the knowledge to make it happen and employing him was so pivotal to its success that his cost was the best investment we could have made.”