When Sheila and Geoff McGaughey planned to build a new house in the pretty Surrey village where they had lived for many years, a bungalow was definitely not part of their wishlist. “We wanted a two-storey home in the style of a barn, but our plot stands in a conservation area and we were restricted to building a single storey,” explains Sheila.

“At first we hated the idea of a bungalow, with its implications of disability and old age, but now we wouldn’t change a thing.” The couple moved to the village of Windlesham 53 years ago, raised a family and lived in three different properties. Then, when their three children had all left home, Sheila and Geoff purchased a plot in the same road with the idea of building a new house for the next stage in their lives.

A tumbledown cottage stood on the garden plot, overlooking open fields, which made gaining planning permission for a replacement dwelling easier to secure.

“We thought it would be exciting to design something from scratch, and although we’d never previously organised a building project we had some experience after buying a property off-plan in Spain,” explains Sheila. “We came into contact with Border Oak at an exhibition and loved the style of oak-framed houses they design and build, so that was our starting point.” 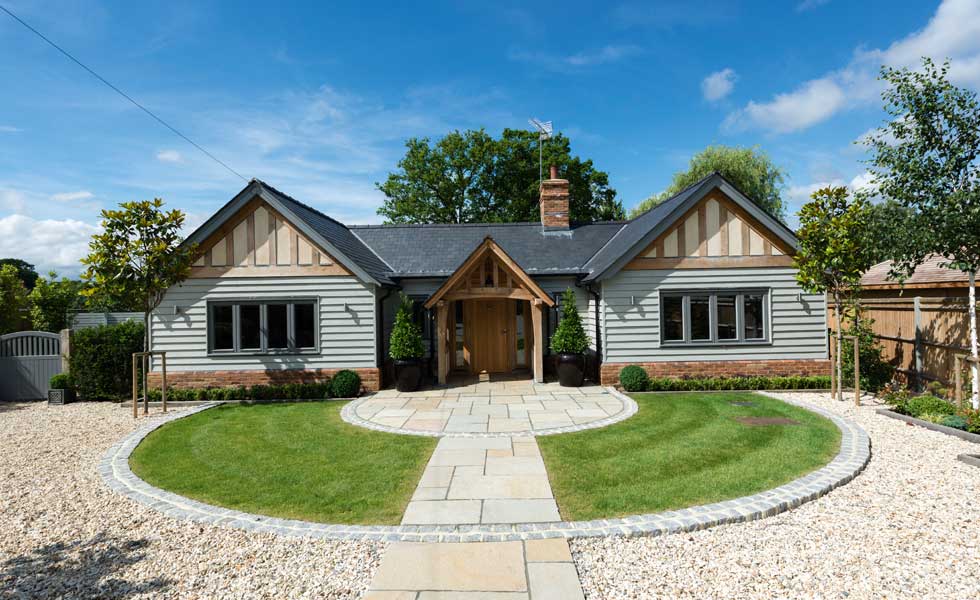 The couple, who are both retired, visited the oak framing company in Herefordshire to discuss their ideas for a traditional home with a contemporary edge, based on the footprint of the old cottage, which stood on their plot.

“Herefordshire has many traditional oak houses, which are beautiful, but we knew we’d have to build something slightly different for our corner of Surrey, and Border Oak came up with a perfect plan,” says Sheila.

“The hard part was knowing that once the frame had been built we couldn’t change our minds, so we needed to think hard about exactly where everything would go from the start.”

(MORE: Is Oak Frame Right for You?) 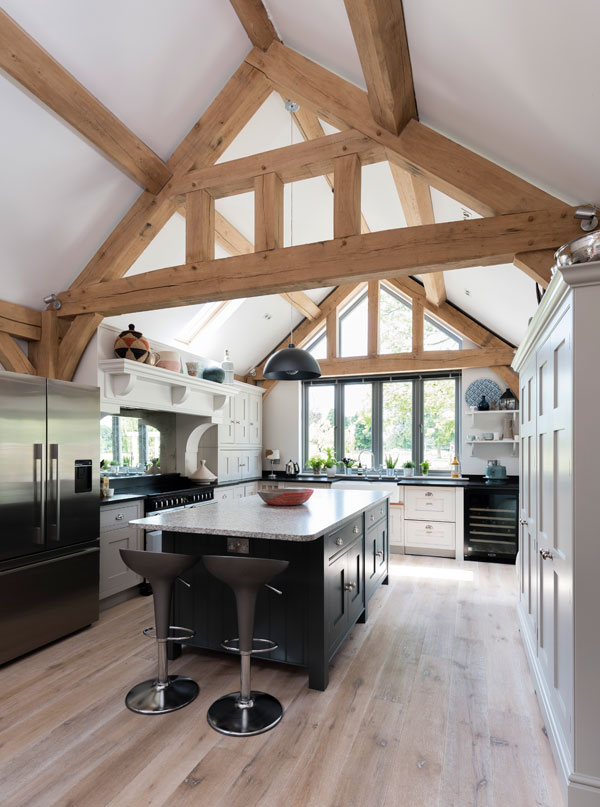 The kitchen, supplied by Thomas Ford and Sons, features beautiful double-height glazing and a larder cupboard. Hand-painted cabinets and an island are teamed with leather-finished granite worktops

Restricted to building just one storey, a layout was devised where a central living room serves to connect the distinct living and bedroom wings, with vaulted ceilings making the space seem far larger than 150m². “Two of our children live in America so we are often away travelling and also need space for guests,” says Sheila. “The house had to work for us as a couple as well as for larger family gatherings, and we wanted a home that would be low maintenance and economical to run.”

The H-shaped cottage is clad externally in painted weatherboarding, with some feature oak framing and a traditional entrance porch — a design which was met with the approval of the planners and conservation officer. Border Oak worked with both hand-drawn concept sketches and CAD technology, producing a comprehensive array of planning, construction and Building Regulations’ drawings for the new property.

“We absolutely loved working with Border Oak — it was like being part of a family,” says Sheila. 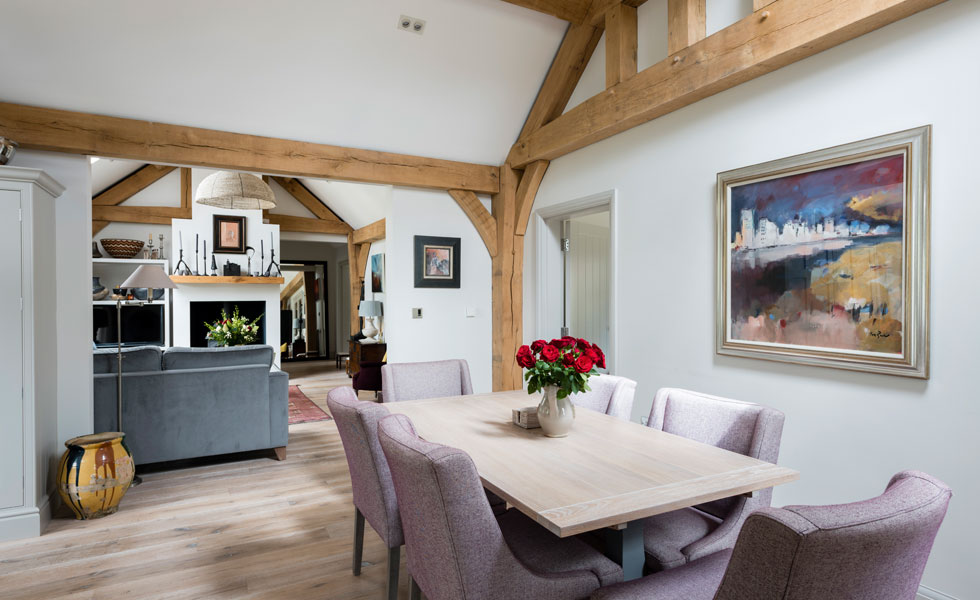 The lime-washed oak floor from Higherground creates a uniform backdrop throughout the house, an ideal base for Sheila’s interior design ideas

“Living just a couple of houses away from the plot meant that we could keep a close eye on things, and we chose our own builder who’s a family friend,” continues Sheila.

The frame was built from FSC and Programme for the Endorsement of Forest Certification (PEFC) certified green oak and was delivered and erected by Border Oak. The company also installed the SIPs (structural insulated panels) which encase the frame, and offer excellent thermal and airtightness performance. Once the house was weathertight the oak frame was cleaned using oxalic acid and has been left untreated.

“I must admit that while the foundations and frame were being built I worried the house wouldn’t be large enough, but as it took shape I could see that it would work,” says Sheila. 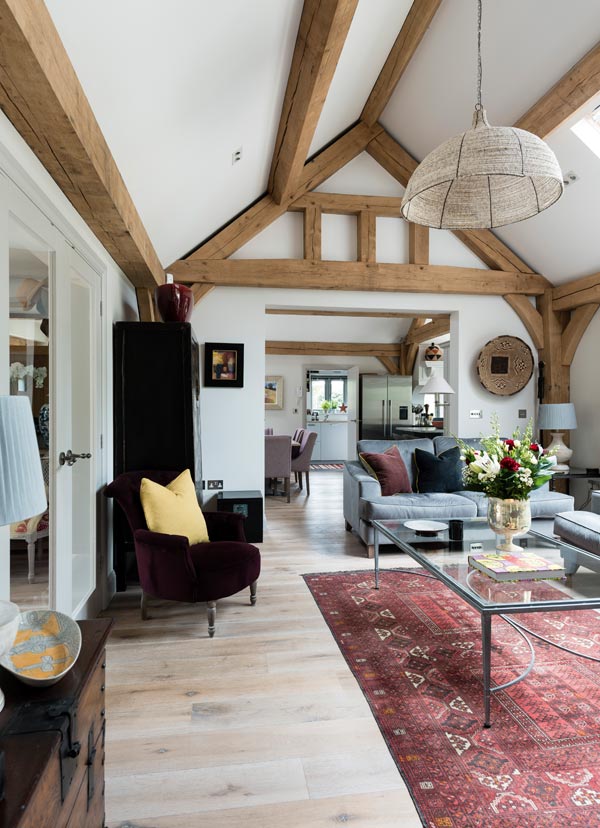 The vaulted sitting room connects to the kitchen/diner through a wide opening and serves as a central link between the two wings of the house, with roof glazing bringing additional light into the space

Natural slate was chosen for the roof covering and softwood windows have been painted grey, as has the external timber weatherboarding. “We worked with Border Oak to choose all colours at the design stage, so that materials would complement each other,” says Sheila. “I can honestly say that there were no real issues during the build at all and everything went to plan.”

Underfloor heating has been laid beneath a limewashed oak floor and is connected to an air source heat pump, with a woodburning stove installed in the vaulted sitting room. 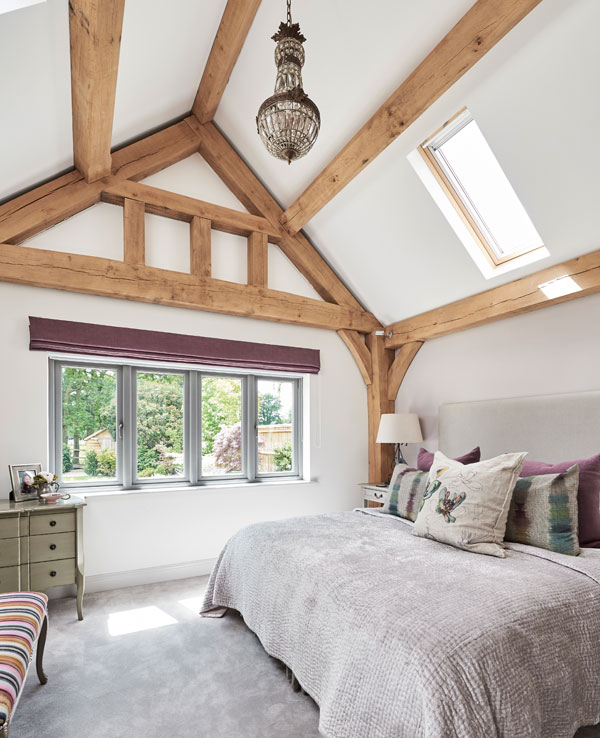 Solid oak timbers frame the bed in the master bedroom, which benefits from a dressing area and spacious en suite

“I’m a bit of a shopper really, and after owning my own gift and lifestyle shop I already had a number of contacts and knew more or less what I wanted,” says Sheila. “I love interiors, so it was great to have a free hand to create the look.”

The couple have also lavished a great deal of attention on the garden, which was designed and landscaped to include an oak-framed garage and a gazebo.

“For us, the setting was all part of building a new house, as this is our outlook. Having all the rooms on the ground floor means we feel far more connected to the outdoors, which was another benefit of the design. Now that we’ve experienced life on one level we’ve completely changed our minds about bungalows, and feel it would be great if another word with more positive, modern connotations could be adopted, generally, to describe single-storey homes!”

Building for Later in Life

It perhaps goes without saying, but bungalows and dormer bungalows are popular house types for lifetime homes. Alternatively, incorporating a ground floor bedroom and bathroom in a two-storey house would allow for single-storey living in the future. 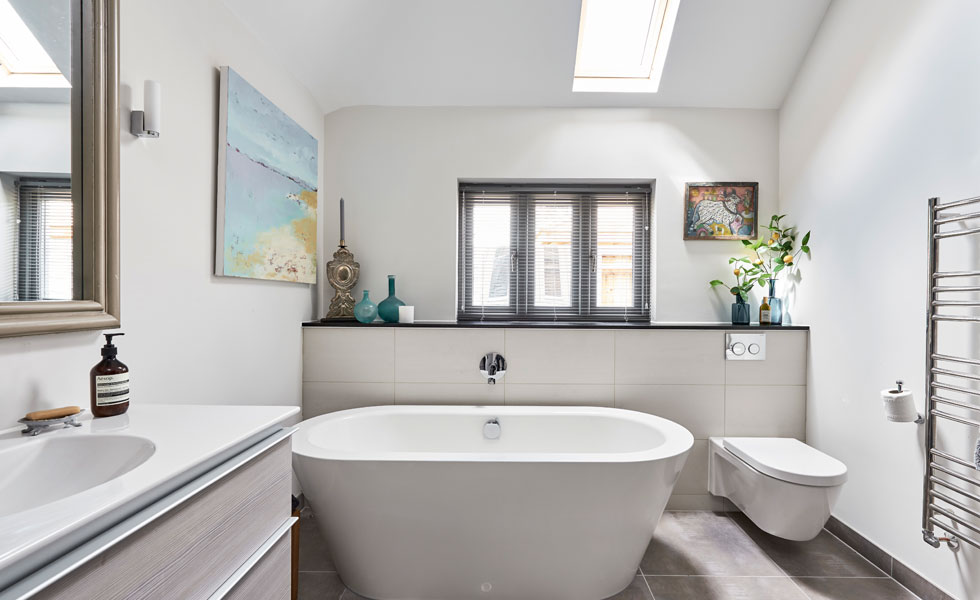 An oval bath and walk-in shower were chosen for the master bathroom, which has a tiled floor (Ceramic Tile Warehouse) laid over underfloor heating

‘Part M – access to and use of dwellings’ of the Building Regulations requires all new homes to consider the needs of disabled occupants to ensure available and usable access for disabled people to the entrance storey, all habitable rooms in that storey and the WC. Simple considerations, such as installing lever taps and door handles, specifying non-slip flooring and ensuring staircases are well lit, work well for all ages — particularly if young grandchildren will be visiting.

Sheila and Geoff knew when they designed their new home that, despite being extremely active, they should consider the future. Geoff had his own engineering business and retired 10 years ago, while Sheila sold her gift and lifestyle shop seven years later, to oversee a building project, which they were able to fund privately. 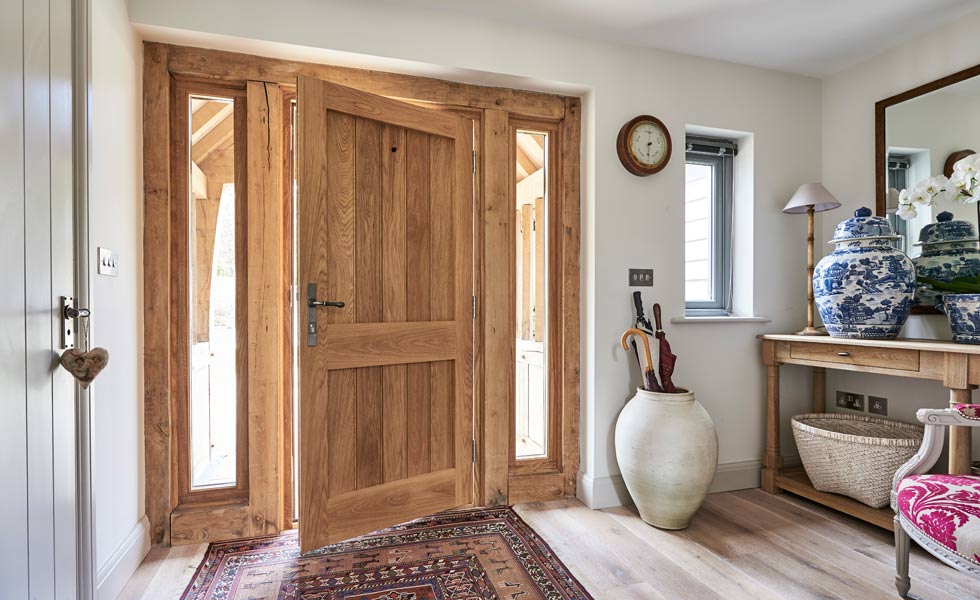 Designed on a single level, with no steps, the property is extremely accessible. Built on a relatively flat plot, the design incorporates wide doorways and an open-plan layout that would be ideal for wheelchair use if required. A separate study beside the dining room doubles as a third bedroom, and both bathrooms have walk-in showers.

“You don’t always want to think about the future, but it’s important to plan ahead, and there’s no point living in a big house if you can’t get upstairs,” says Sheila. “It’s enjoyable when you’re older to start again and we haven’t discounted building again, either, as we enjoyed this project so much.

“At first, we didn’t want a bungalow, but now we love the layout and to us it feels more like a cottage. The only drawback we’ve found to living on a single storey is that sometimes in the summer you don’t feel comfortable leaving bedroom windows open at night, but really we wouldn’t change a thing,” Sheila concludes.