“This early Victorian house had suffered a disastrous makeover in the 1970s,” comments Steven James Taylor, the designer behind this transformation. “Its appearance was ruined by the inappropriate installation of cheap, modern windows which were the wrong shape, size and era for the house.” Steven continues: “The front door was bland and the Victorian bay window – usually a major selling point – had been completely removed.” 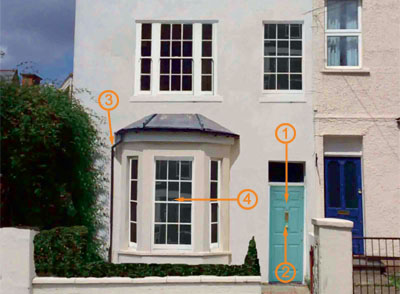 The bay window has now been reconstructed and a new master bedroom suite added to the roof. A Victorian-style front door completes the new façade and “is instantly more welcoming to visitors.” Steven continues: “The garden is an extension of your home and needs equal attention. Broken fences and crumbling garden walls have a negative impact on the overall appearance of your home. Here the garden wall has been painted to match the exterior of the house. A new front garden helps finish off the look.”

Steven offers the following advice for those renovating period homes: “For the best results when replacing windows and doors, stick to the original period of the house. PVCu is rarely a good choice, unless you live next to a busy road or in areas of extreme weather. There are, however, PVCu sash windows available — they’re more expensive, but any extra cost will be recouped in the added value to your home.

“It is strongly advisable not to cover up original brickwork. It’s less attractive and you’re committing yourself to reapplying a coat of paint at least once every two years. Removing the render here would have eaten up too much of the client’s budget, so instead we’ve given it a fresh coat of paint.”

1. Entrance Door: Victorian entrance doors were divided into four or six panels, typically made from hardwood and painted. Later in the period they contained stained or etched glass, like this example from Purlfrost Window Film (purlfrost.com).

2. Door Furniture: Choose door furniture to complement both the style and period of your door. Solid brass door handles, knockers and letterboxes were the de rigeur accessory to Victorian doors. This brass lion’s head knocker is from Jim Lawrence (jim-lawrence.co.uk) £45.

3. Cast-iron Downpipes: Cast iron was the predominant material for rainwater goods. Yet, cast iron is weighty and walls need to be structurally sound. If your walls can’t take the strain, specify a product which replicates cast iron such as the above, from Brett Martin (brettmartin.com).

4. Sash Windows: Vertical sash windows were common on Victorian homes. Early examples included six panes over six; later, four over a single pane below. The advent of larger glass panes lead to examples such as the above (here in PVCu) from Franklin Windows (0113 250 2991). 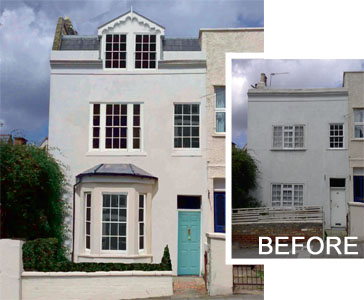 Steven James Tyler is the Director and Designer at Erincastle Bespoke House Design.