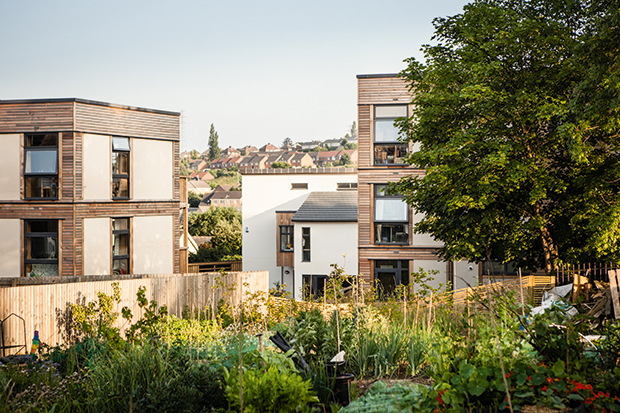 After its residents began to move in last May, this new 20-household co-housing development in Leeds is still finding its feet. Mark Brinkley investigates. 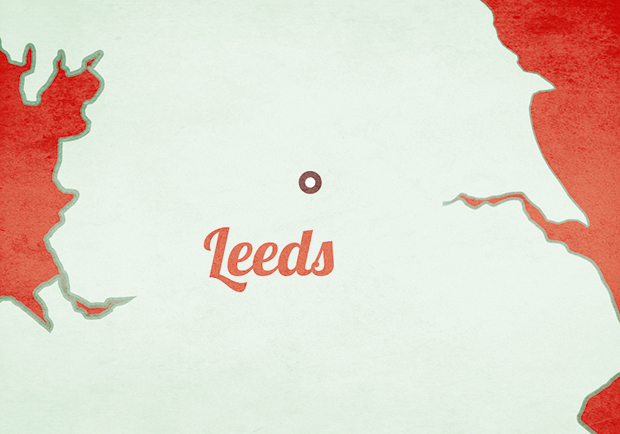 Co-housing is a novel approach to our housing problems. In a co-housing development, everybody has their own house or apartment, but there is also a common house where members of the group can gather to meet, do the washing and share occasional meals.

An alternative name for co-housing is ‘intentional community’ and the Lilac scheme in Leeds is a little bit more intentional than others I have come across. The name Lilac is, itself, an acronym and embedded within it are three goals: Low Impact Living, Affordable, Community.

So already, you know that Lilac is about more than just finding a comfortable place to reside with some friendly neighbours: Lilac is setting out a beacon for others to follow.

How did it all begin?

Co-housing groups don’t form spontaneously. They usually coalesce around a core of people who nurture the dream, and these early leaders also tend to set the tone for the community.

Lilac is no exception to this rule and the key individuals in this respect are two couples in their 30s, who were already close friends, as well as being committed environmental activists. One of them, Paul Chatterton, a geography lecturer at Leeds University, has acted as the group evangelist and gives presentations and lectures on the benefits of co-housing and the Lilac model.

The core group began their quest for a site in 2007 but, like many co-housing groups, they spent years talking about it before anything concrete happened. Then, in 2010, they located a derelict school site in Bramley, Leeds.

With the help of the Homes and Communities Agency, they tried to persuade the city council to sell them the site, but the ground was deemed to be contaminated so, before any sale could take place, the council spent £150,000 on remediation. Only then would they consider a sale. The price was struck at £200,000 — just £10,000 per unit.

By this point the group had expanded to a size where nearly all the 20 homes were spoken for and members were all asked to stump up deposits to purchase the site. 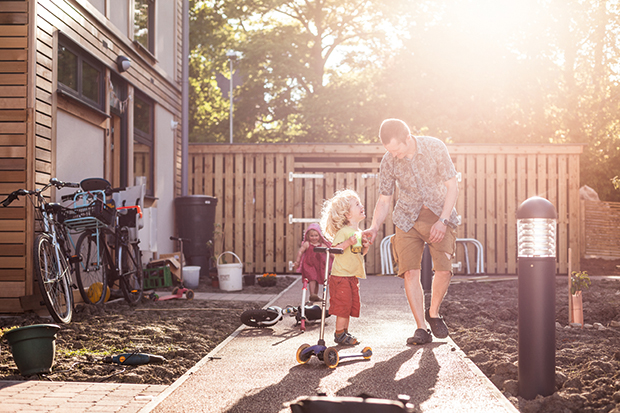 Lilac consists of five housing blocks arranged around a garden and pond. The terraced style housing blocks have their own gardens but none of the occupants have put up dividing fencing yet

Lilac consists of five housing blocks arranged around a garden space, with the common house at its centre.

The homes themselves are a mix of one, two, three and four bedroomed units, ranging in price from £65,000 to £200,000. Each one has its own kitchen, and just about the only feature of a modern house they don’t have is the laundry appliances, because Lilac encourages collective laundry in the common house.

The smaller units are built around common stairwells and shared entrances (just like you would find in a conventional block of flats). The larger units are essentially terraced housing with front doors and back gardens, though no one has yet seen fit to erect any garden fencing.

What is different with these units is the way they have been designed and built, using the skills of designer Craig White and ModCell, an innovative straw bale building business. The ModCell method consists of setting up a small factory nearby to build the walls — a process which many of the Lilac members contributed to. 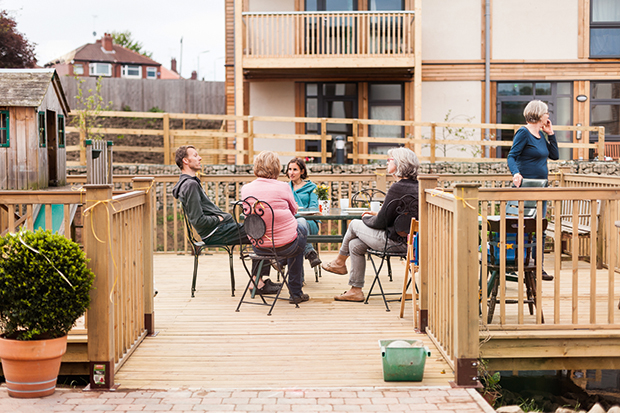 The walls are covered in a mix of lime render and cedar panelling to give a very distinctive feel to the whole development. It’s certainly photogenic and it represents quite a coup for White’s business — Lilac is its biggest project to date.

The whole project was let to the builders, Lindum, who worked with ModCell to erect and finish the units and to complete the site. While the homes are essentially similar in their specification, there was a certain amount of customisation involved.

There was discussion of using a scheme-wide heating system, but this was ruled out as it was reckoned to be too costly. It was felt that the overall thermal performance of the Lilac homes was to be so good that it simply wasn’t necessary to spend a great deal of money on a complex heating strategy.

Instead, heating is by conventional gas boilers — one per unit. Each unit also has a mechanical ventilation heat recovery system, which enables the indoor air quality to remain high without having to open the windows.

In common with most co-housing schemes, cars are relegated to peripheral parking areas, while bikes are everywhere — there are three lockable bike sheds on site.

Lilac has pioneered a new style of home ownership, known as a mutual home ownership scheme. This means that rather than buying the individual units, as happens in many other co-housing schemes, Lilac as an entity owns the entire development and each household buys shares in it which gives each one a vote.

Under the terms of the lease, members pay into the co-operative and gradually buy equity shares in the scheme. After deductions for maintenance, insurance, etc., these payments are grouped together to pay the Lilac mortgage. The payment that residents make each month and the number of equity shares they hold depends on how much they earn. Monthly payments are set at around 35 per cent of net income.

The accounting is complex and the community have developed some bespoke software called Dwell which keeps tabs on everyone’s situation, as well as helping to manage the running of the community. 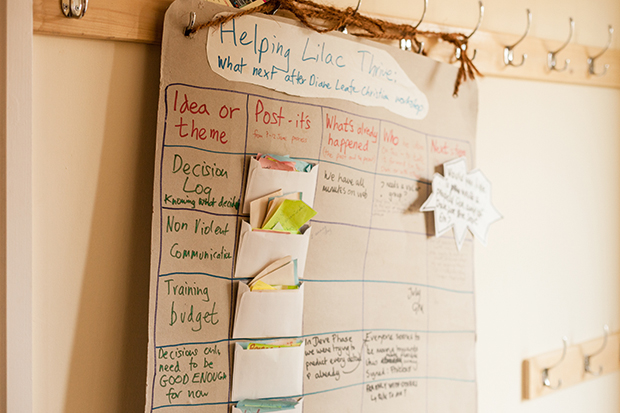 Pioneering it may be, but the big pull of co-housing arguably isn’t eco development or co-operative ownership, but instead the people and their sense of community. What visitors to Lilac ultimately want to know is: “What’s it really like to live in an ‘intentional community’?”

If its first six months is anything to go by, Lilac seems to be very harmonious and relaxed. It reminded me of nothing so much as a university campus, where everyone knows everyone else and goes about their business in what seems like a fairly studious manner.

Ages range from pre-school children to pensioners in their late 70s, but despite this, the group is pretty cohesive because, to a large extent, it’s self-selecting. There are specific aspirations for Lilac that, if you didn’t sign up to in the first place, you wouldn’t want to join. Nevertheless, 20 households don’t live together peacefully without some solid ground rules, so there are rules and rotas in place which gives rise to a slightly institutional feel.

A lot revolves around the common house: it houses a kitchen and dining room, which hosts non-compulsory group meals twice a week, as well as a workshop, laundrette and a couple of meeting rooms. The meals produced have to cater for the many varied dietary requirements, so there are notices up about who eats what — which makes recipe planning a bit complicated.

The idea is that you volunteer to cook once every three months and to either assist or clean up on other occasions, decided on by the rota. The rest of the time you just turn up and eat for £3. 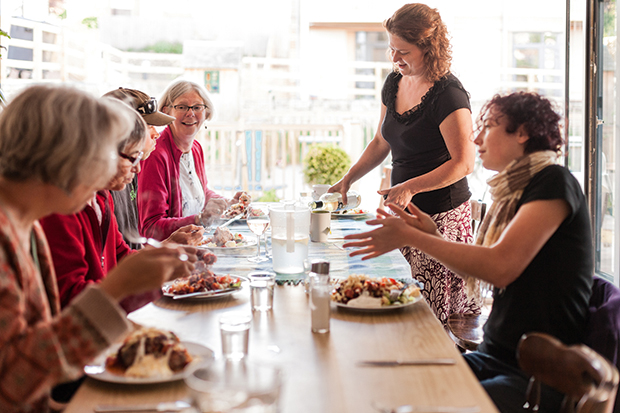 With 20 families to feed, each household volunteers to cook once every two months, and a rota is used to decide who cleans up

Lilac have also created nine ‘task teams’ which manage various aspects of the community, such as: membership issues, finance, maintenance and community learning. Every adult member is expected to sit on at least two of these teams and to respond to relevant round-robin emails.

Then there is a general management meeting which takes place once every two months, which the task teams report to, and all members are encouraged to feed in comments for inclusion on the agenda. Topics for discussion during my visit included car sharing, washing lines and site security — there had been some bike thefts and some had suggested CCTV to be installed, though the group as a whole seem likely to reject this idea.

There is no compulsion to join in group activities, but you’d be unlikely to join a co-housing group if you didn’t want to. When I last checked, community member Liz had been working in the garden: “It was a lovely day again, and a landscape workshop was scheduled, so I was outside all day, apart from lunch which we shared in the common house. We got all the tasks listed done — it’s a satisfying feeling.”

The Lilac story poses some interesting questions: is it enough to self build? Is it enough to be sustainable? Should we be creating communities rather than just buildings? And, is Lilac the new green?

For more information on the Lilac development, visit Lilac’s website.

All images by Andy Lord

Back to co-housing projects page.