1. Open Fireplaces: An open fireplace is an open recess in the wall at the base of the chimney where a fire of your choice can be positioned, along with your choice of surround. Inglenooks are classed as open fireplaces.

2. Hole-in-the-Wall: These strip the fireplace of all fuss — there is no surround or mantel, just an opening set into the wall with a firebasket to hold fuel or a gas-fuelled firebed of pebbles, logs or ceramic shapes.

3. All-in-Ones: This term relates to any style of fireplace which incorporates all the elements in its design, including firebasket, fireback and mantel. They do not usually include hearths.

4. Hob Grates: By the early 19th century most Georgian and Victorian coal-burning fireplaces had a cast-iron hob on either side of the grate with iron. These hobs were originally used for cooking.

5. Register Grates: Common from the 1850s, register grates are cast as one piece, incorporating the grate, fireback (or backplate), an inner frame and a moveable plate in the flue section in order to adjust the draught.

Calculating the Size of Your Fireplace

For any fire to work well, it must be connected to a chimney in good condition and a correctly sized flue. The chimney should safely remove the products of combustion from the fireplace to outside. For it to work properly, the flue gasses must be kept warm (in order to rise), so thought must be given to lining the flue too. Prior to the introduction of the Building Regulations in 1965, which state that all flues must be built with liners, flues were usually rendered on the inside with lime mortar. This render will commonly have deteriorated over the years, so if you home was built before 1965 you will need to get it checked (contact the National Association of Chimney Sweeps: 01785 811732). If you are fitting a new fireplace to an existing chimney, the size of the fireplace must suit the chimney. A common mistake is to make the opening too big, resulting in a poor draw and a smokey fire. The opening should be no more than eight times the area of the flue for square or rectangular chimneys. For round metal chimney liners, the opening should be no more than ten times the area of the liner. 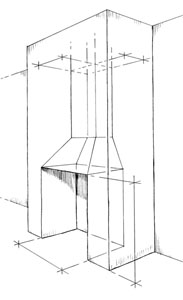 Mantlepieces are most commonly fixed directly to the brickwork, before being plastered in. If you are renovating as opposed to self-building, you will also need to refit any skirting boards around your new surround. A drying-out period is required after a surround has been fixed, so that the fireproofing and sealing materials used have time to dry properly — experts recommend leaving it five to seven days in a heated house before a fire is lit. If your surround or hearth is made from stone, you may notice patches of damp or some discolouration to begin with, although these should dry out and disappear within a couple of weeks.

All open fires, whether you intend on burning solid fuel or gas, need a hearth — unless the manufacturer’s instructions state otherwise. A hearth should extend forwards from the fireplace opening by 300mm and 150mm on either side. These measurements should be taken from either the front of the fireplace opening or, where the fire is recessed into the opening, from the front of the burner. In the case of stoves, a hearth should extend 500mm in front of one that is recessed into a fireplace. With freestanding stoves, the hearth must not be less than 840mm² and the stove must not be positioned closer that 150mm to any of its edges. If your stove has doors that open, the hearth must extend at least 300mm from the front of the stove and in cases where the doors cannot be opened, 225mm from the front. Hearths for both fireplaces and stoves must be at least 50mm deep and made from a noncombustible material. 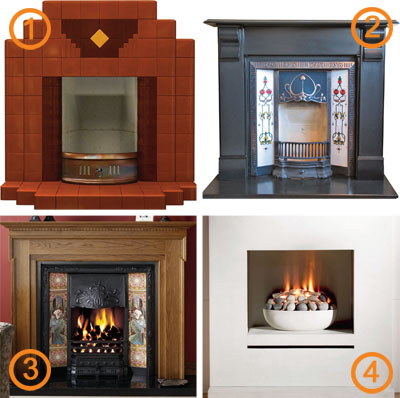 1. 1920s and 1930s: Cast-iron went out of fashion and the fully tiled fireplace came in. Brown, yellow and beige tiles were top of most people’s wishlist.

2. Edwardian: Cast-iron register grates were common, but Art Nouveau designs came into fashion, seen on tiled cheeks and as motifs on the surround. Simple, classical designs were also popular. Marble and slate, enamelled to look like marble, were also favourites. Glazed bricks were also often used, as were ornate oak surrounds with mirrors and shelves.

3. Victorian: Hob grates were popular, but from 1850 the cast-iron register grate appeared, firstly with a round top, and later with a straight top — cast in one piece. Corbels were often used to support the mantel and from 1880 the smoke hood was introduced. The inglenook became more of an alcove. Tiled cheeks were popular between 1880 and 1900.

4. Present Day: Fireplaces are once again seen as desirable features in a home, be it a restored original or a way of creating a striking focal point. In recent years, the hole-in-the wall fireplace has become incredibly popular, as have central and double-sided fireplaces.

5. Georgian: Commonly fireplaces were open – the first inglenooks made an appearance – with either a firebasket or hob grate made from brick or iron. Inglenooks were far larger than in the Victorian period, with space for chairs either side of the fire. Surrounds were made from brick or stone. Later on, and in grander houses, marble, slate or wood were used.

6. 1950s and 1960s: The fully tiled look was in, with grand arches and curves being particularly fashionable. Brick-effect tiles and solid concrete fireplaces were also popular. Sandy, straw and burgundy tiles were widely seen.

Materials: Wood, Stone, Metal or Nothing at All?

Wood: Wooden surrounds, particularly those made from pine, are ideal for country-style properties. More elaborate designs are also available in mahogany and oak. Contemporary models in richer dark woods are now coming into fashion.

Hole-in-the-Wall: Despite being popular with fans of contemporary design, hole-in-the-wall fireplaces are actually suited to many different types of fire, from gas to wood burning stoves. They create a focal point without being fussy.

Stone: Although stone fireplaces are most commonly thought of as ideal for traditional homes, being prominent fixtures in houses during the Georgian and Victorian eras, they are now available in a host of contemporary styles too, lending themselves well to crisp, minimalist designs.

Metal: Cast-iron fireplaces were hugely popular during the Victorian and Edwardian periods, but they are now also available highly polished to a sheen and in more contemporary designs. One of the newest trends is also for stainless-steel fire surrounds, in either a polished or brushed finish.

If you don’t have a chimney… 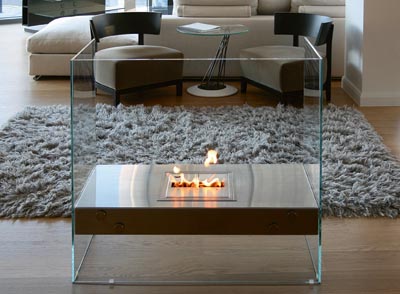 If you want to fit a fireplace into a house with no chimney, there are several options. Either you could fit the fire to an outside wall and vent the fireplace directly outside, or you could choose a vent-free or flueless fireplace. Choices include flueless gas and electric fires, as well as those that burn bio ethanol, an eco-friendly fuel that emits no harmful gases.

Although a useful way for those with no chimney to have a fire, some vent-free fires have been subject to safety warnings. According to the American Gas Association, most of these fireplaces can only be used for a maximum of four hours at a time and cannot be used in small spaces. It is also discouraged for anyone who has respiratory problems, a heart condition, is pregnant, anaemic or diabetic to use them. They can also produce excess moisture and sometimes emit a noticeable smell. However, manufacturers are quick to point out that in most cases any associated problems have been caused by bad-fitting or poor-quality appliances.

Things You Should Know If…

You intend to have an open fire: You will need a hearth, unless the manufacturer’s instructions state otherwise. All open fires, be they solid fuel or gas, require a hearth (SEE HEARTHS).

You intend to have a gas fire: Only a Gas Safe Register engineer should install a gas fire.

You intend to burn coal or smokeless coal: You will need a firebasket with a bottom grate as these fuels produce much more ash than wood fuel and the grate will allow ash to fall away. Coal also needs air underneath the fire in order to burn, and a grate makes this possible.

You intend to burn wood: You must have your chimney swept twice a year. Don’t burn treated or seasoned wood as they may emit harmful chemicals.

You want an inglenook: In recent years, stringent requirements for energy-efficiency levels have made it difficult for any sort of open fire – let alone an inglenook – to meet Building Regulations. Using an enclosed stove within an inglenook is one solution, making it easier to achieve the required SAP rating.

If you want an inglenook with a large chimney opening, you will have to compensate for the heat loss you’ll incur in other areas of your build, such as using high insulation levels or installing solar water heating. The other option is to install a small flue at the rear of the inglenook to restrict air intake without compromising on appearance. 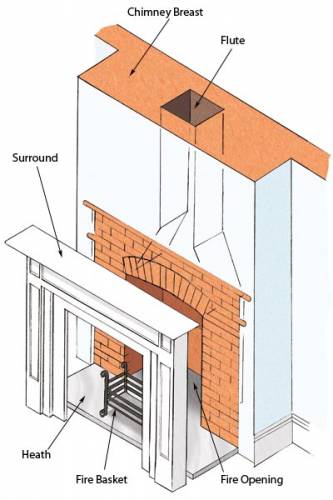 MANTEL: Also known as the ‘chimneypiece’, the mantel makes up the shelf above the fireplace and is often part of the surround.
FIRE HOOD: Projecting out over the fireplace this confines smoke to the flue.
GRATE: A metal frame for holding the fuel.
CHEEK: The angled sections to either side of the fire, often tiled.
FLUE: Vertical opening through chimney, designed to create draft and extract smoke.

Advice from the Experts

“Most fireplace installers will try to protect your precious furnishings, but it’s always safer to arrange for a carpet fitter to remove any floor coverings. If the installation involves a lot of masonry removal, why not seal the doors in to other rooms where dust may cause mess and damage. It also goes without saying that you also need to cover furniture and place mats down, that can be cleaned afterwards, to remove any dust on feet.”

“In line with retailing as a whole, many decide to buy online because they perceive that money can be saved. However, when it comes to installation they may find many fireplace installers reluctant to fit a product they didn’t supply, while others find that the product they have bought just isn’t suitable. My advice is to buy through a showroom and get a proper survey before installation.”