The couple have converted the property and added an extension. The extension houses the new living room, along with two bedrooms and a utility, and has created a H-shaped floorplan. The master bedroom and kitchen reside in the old wing and a conservatory and entrance/ dining hall link the two wings.

The little green tin-clad Victorian counting house, perched on a hillside amongst worked-out claypits, is not an obvious choice for a family home for most. For nigh-on 100 years the timber frame building served the surrounding workings, and was also the home of the ‘wage captain’ — the man responsible for paying the labour force.

Over the years the ravages of the Dartmoor winters had gradually worn away the metal cladding — a process exacerbated by many years of neglect. But the strong softwood frame remained intact — just waiting for its new owners, architect Mike Hope and wife Zoe, a nurse, to give it the attention it needed to serve as a cosy family home for them and their two year-old son Alex.

The building the Hopes have transformed looks essentially the same, but the green tin walls are now metallic silver and the old black corrugated-iron roof has been replaced with shiny ribbed steel. In contrast with the tin cladding, a new wing clad in vertical larch boarding has been added. It produces a lively effect, especially when you enter the cosy interiors and find that it is supported by a glorious oak frame. 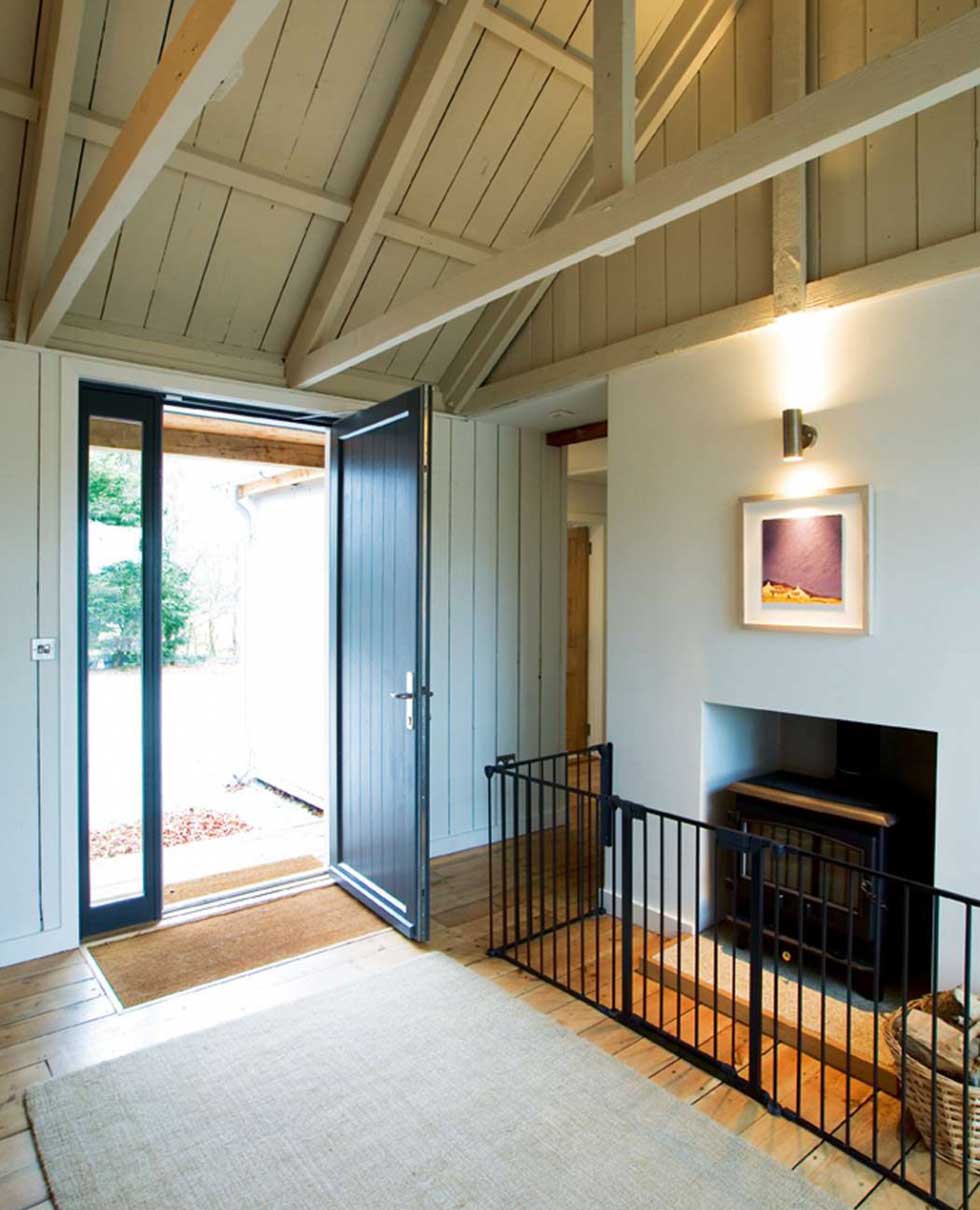 The Hopes have also extended a former flat-roofed side extension to create a central space connecting these two wings. The enlarged floorplan has not only provided adequate room for the family, but created further roof space to allow for the installation – at a later stage – of solar PV (photovoltaic) panels.

However, such additions to the existing house did initially prove a sensitive issue with the planners — especially as a nearby bridge over the fast-flowing River Plym is a renowned beauty spot. “There were some tricky design problems, some of which were caused by the planning restrictions we faced,” explains Mike. 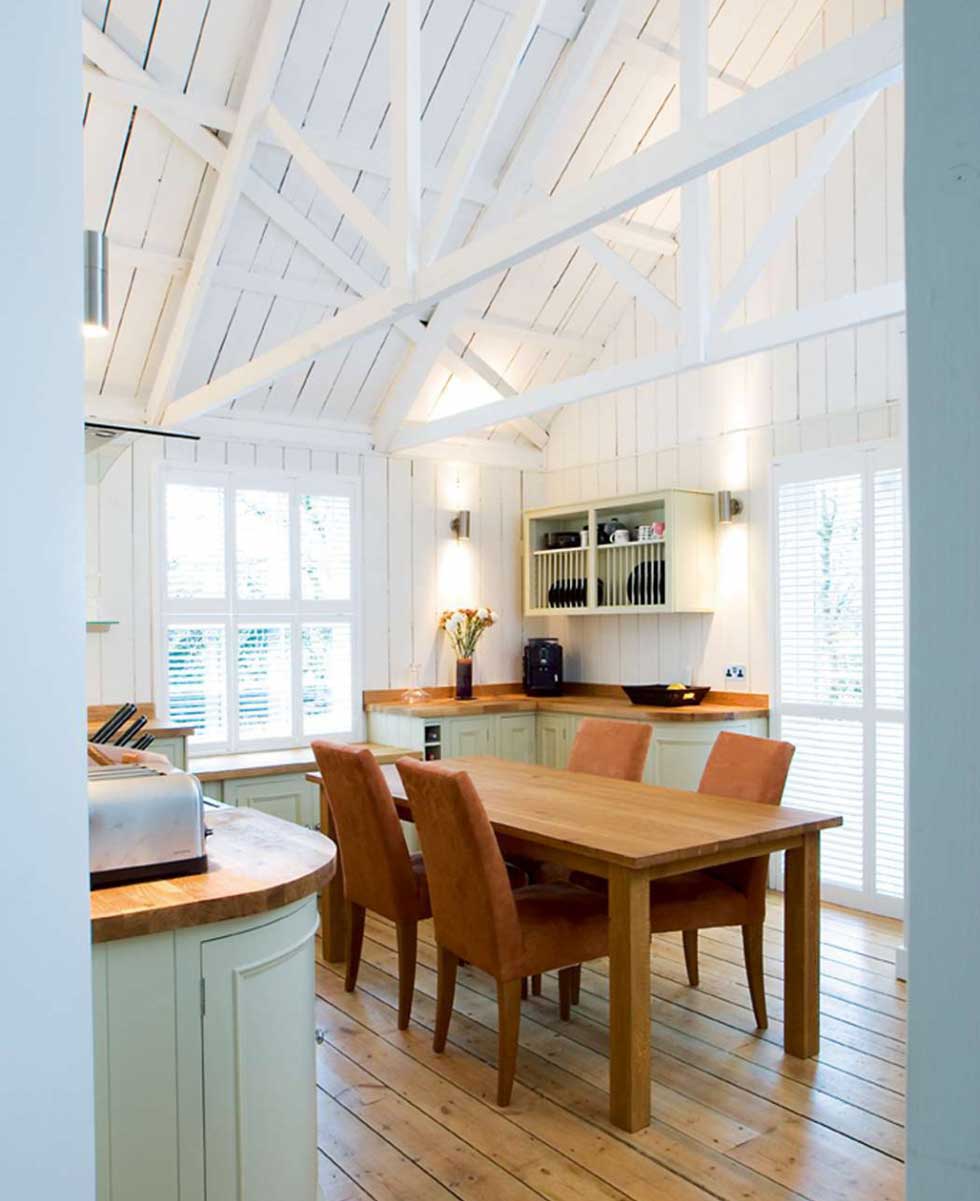 “The planners insisted we retained the same window openings on the side nearest the bridge — the south side. So when the solar panels are eventually in position they will be on the south-facing roof of the new wing,” explains Mike. “Because of this restriction we also had to position the only rooflights in the new wing, and the conservatory on the west-facing rear.

“We were actually quite lucky being able to gain permission for the new wing on such a sensitive site. Although the building is not listed, there is a National Park Authority planning policy that relates to buildings like this, which are deemed to be of special historic interest. The fact that there was a flat-roofed extension, which formally housed a kitchen and bathroom, certainly helped our case.”

Internally, the family have made the most of what is not a large house. Within one bedroom, they’ve even created additional space by introducing a sleeping platform accessed by a ladder. The oak frame (the trademark of Devon-based Roderick James Architects, in which Mike is a partner) of the new wing, made by Carpenter Oak, has also added design flair. The new oak contrasts well with the softwood framing of the exposed ceilings in the original wing of the house. 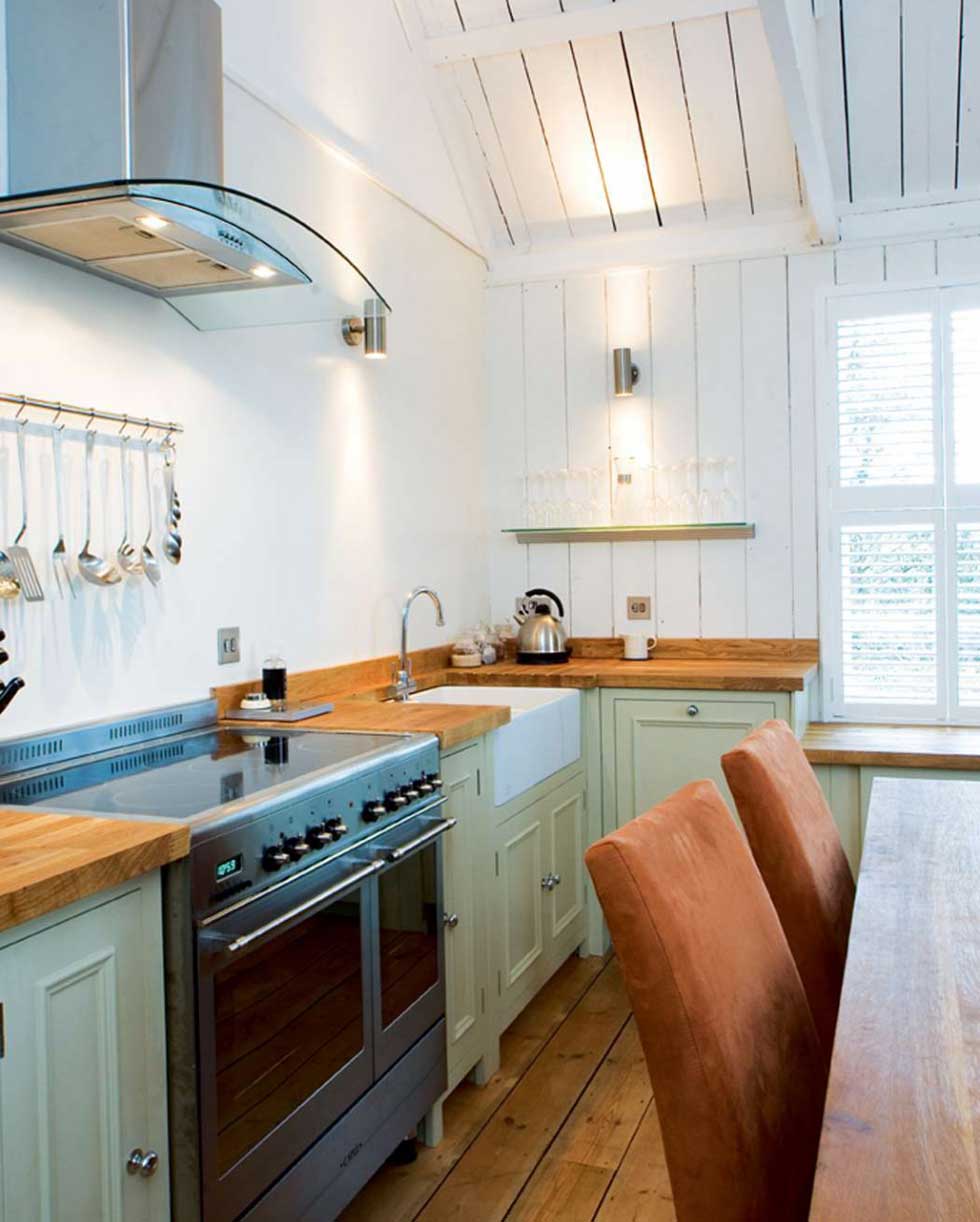 Country-chic kitchen units, from Neptune Classics, and timber worktops and flooring complement the existing timber frame of the original wing

The sitting room in the new wing also has an interesting cantilevered arrangement supporting it externally on the rear. “I wanted a light footprint. We have been able to place the entire new oak frame wing on six foundation pads,” says Mike.

Despite careful preparation, the project took far longer than Mike and Zoe anticipated – 13 months in total – and there were a number of dramas.

During the build the family lived in an annexe, which the previous owner had built as a workroom. “This proved a mixed blessing,” reflects Mike. “I was able to be on site, but it took up a great deal of time managing the job myself when I was constantly busy running the Totnes office of the architectural practice. At times it was very hard, not least because of the arrival of baby Alex just before work began.

“If we were ever to do another project – although we love it here and have every intention of staying for many years – I think we would go for a main contractor-style arrangement. However, by being project manager this time we were able to get more or less what we wanted, and also make some amazing savings, which would almost certainly not have been possible if someone else had been running the job.” 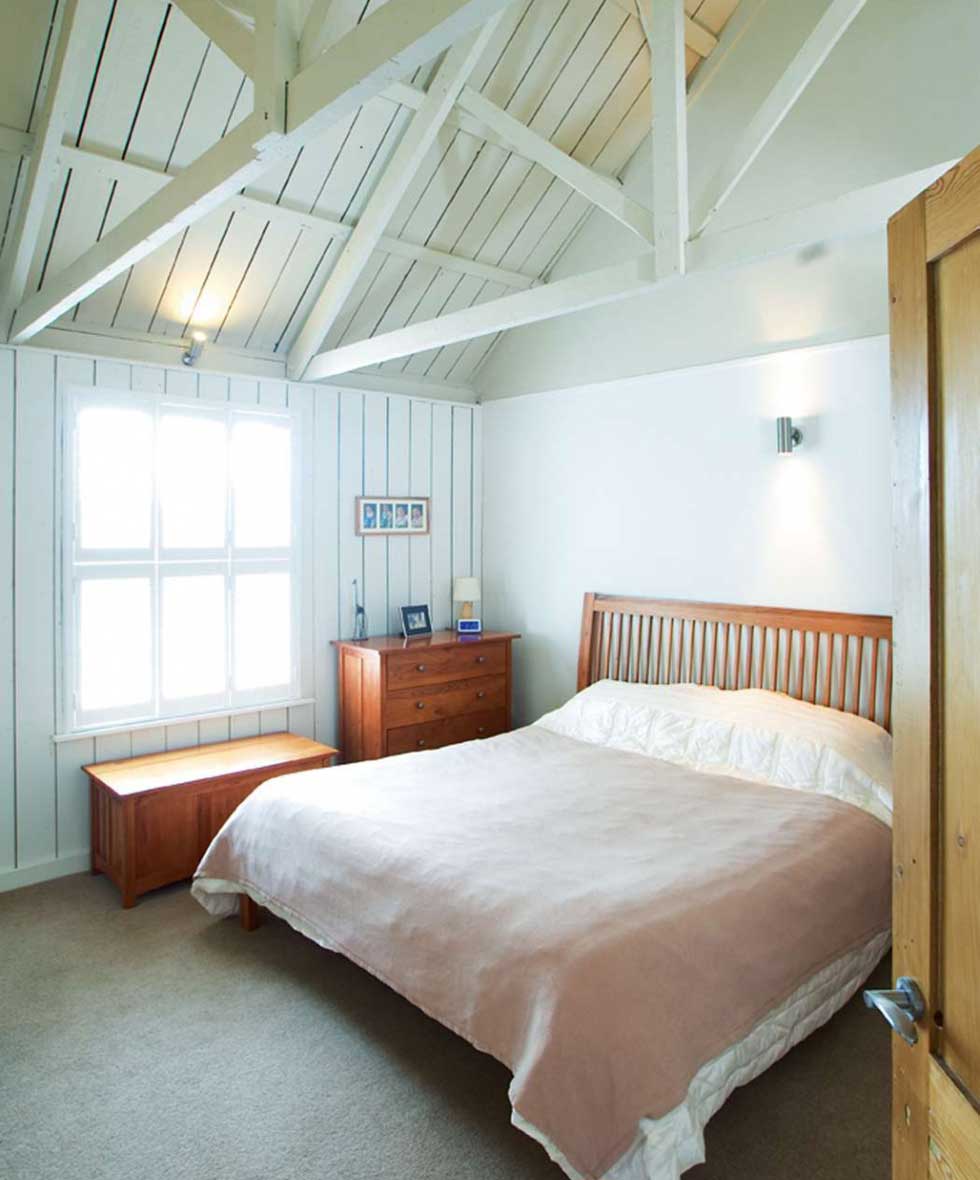 The original timber frame has been exposed internally as a feature and painted white to make the interiors feel light and airy. The vertical cladding creates a coastal feel

A winter power cut did, however, make the couple appreciate their vulnerability to the elements whilst living on site. “We were in the annexe with a new baby throughout the very hard winter of 2008/9. One Saturday evening in November the power suddenly went off. We had no land line, and I had to walk up the nearest hill on the Moor in very bad conditions to seek help via my mobile phone,” explains Mike.

“Power was absolutely vital because all our heating in the annexe was electric. We were saved by a brilliant team from Western Electricity. They worked under floodlights and a temporary cover to find the fault – a partly severed cable due to an excavating machine – and rectified it within a few hours.

“We learned a lesson from the experience — you have to be properly prepared for living on the Moor. The weather here at 1,000ft is far less forgiving than in Totnes or Plymouth, and for much of the year there is a constant wind-chill factor. You have to plan these factors into a project of this sort.” 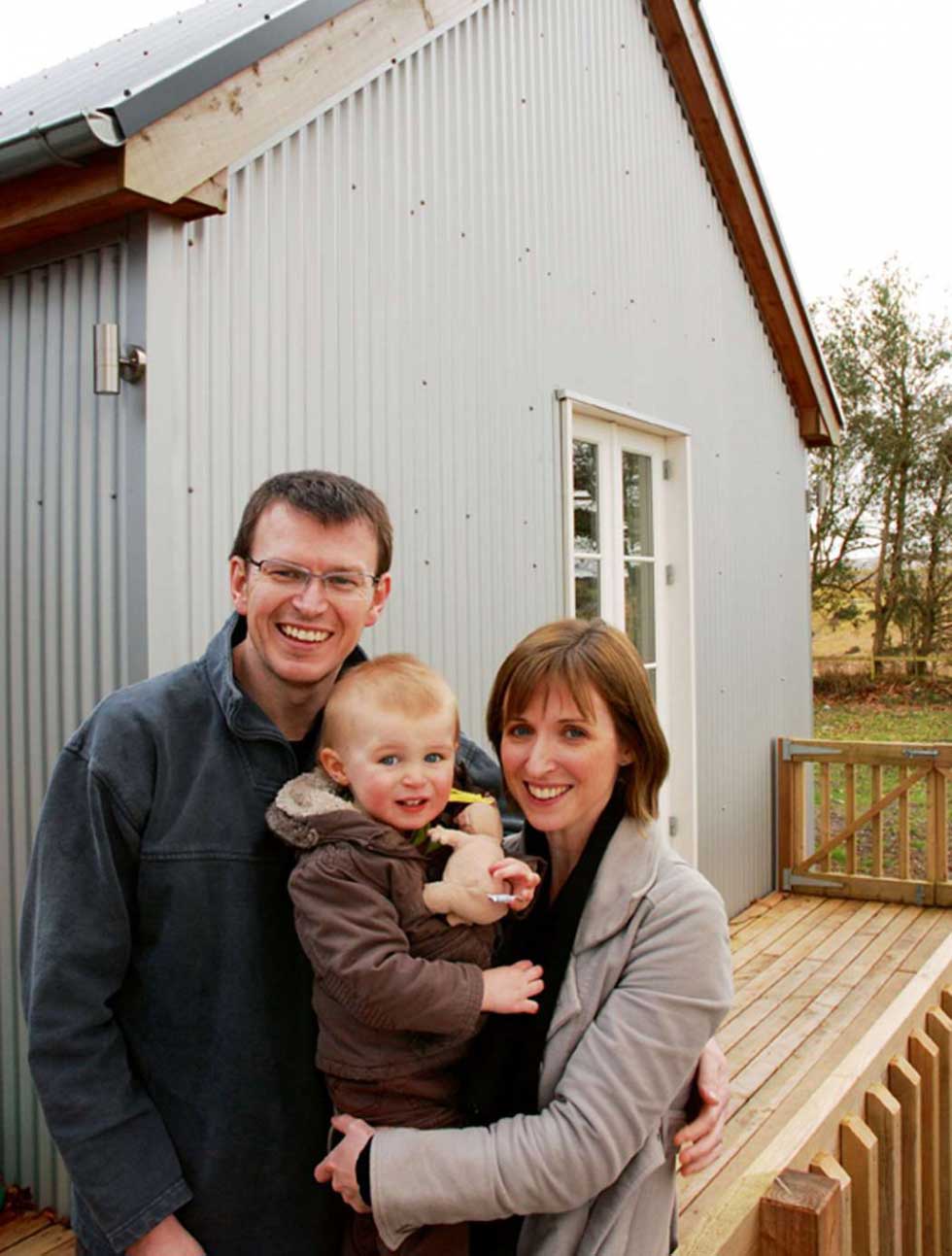 Electricity remains essential in the couple’s home — it’s required to power the pump that circulates water around the heating system. “We also need electricity to pump up the water from a borehole through our air-source heat pump. That’s why it would be marvellous if we could generate our own power using solar PV,” says Mike. “It’s nice to think that there’s a possibility that we might eventually be able to make the house zero-carbon.

“The build is a good example of what I like to call ‘eco pragmatism’,” concludes Mike. “Even if you have an old building you can do a great deal to update and enhance its thermal capacity. And if you listen, learn and read the relevant literature, you can update a home and turn it into something really interesting.”

The new silver façade was met with mixed response from the neighbouring community. “Some of the people who have lived round here a long time found it hard to accept the change of colour,” says Zoe, who was born and raised in Devon.

“We just couldn’t find the right shade of green for the outside,” explains Mike. “All the available greens in the correctly formulated paint seemed to look too military. And, after all, this is basically an industrial building, so to us the ‘unpainted-iron’ look was highly appropriate — and the planners of Dartmoor National Park Authority agreed.”

The Hopes have opted for an interesting means of providing heat — an air-source heat pump. The unit is relatively unobtrusive and sited in an odd corner of the garden where it will eventually be concealed by the garage which Mike and Zoe aim to build. Since the unit was installed in January 2010, the couple estimate their heating bills have nearly halved.

“This form of heat pump is driven by electricity, but for 1kW of electricity usage it will generate 3kW of heat energy,” Mike says. “It’s not as efficient as a ground-source heat pump, but we were advised that it is the best type to go for in this situation.

“The total system, including the connection to the back boiler on the hall log burner, the cylinder installation and underfloor heating, cost £14,000. However, with the potential introduction of the Renewable Heat Incentive for renewable technologies next April, we hope to be about £1,000 a year better off. So, the system may eventually pay for itself.”