After falling in love with the wilderness of the Hebridean Isle of Tiree during four decades of family holidays with their four children, Liz and Dave Kerr realised a lifelong dream when they bought a traditional blackhouse on a white sandy bay.

With a modest restoration of the B-listed blackhouse and a small extension in mind, they certainly didn’t expect to find themselves building a new house from scratch — and doing so with the help of their London-based architect son, Murray Kerr.

The blackhouse underwent a structural survey which revealed it to be unsafe. As a result, they would have to knock it down and start again.

However, before they could demolish it, the cottage had to be de-listed by Historic Scotland. This involved a consultation process which took nearly a year. 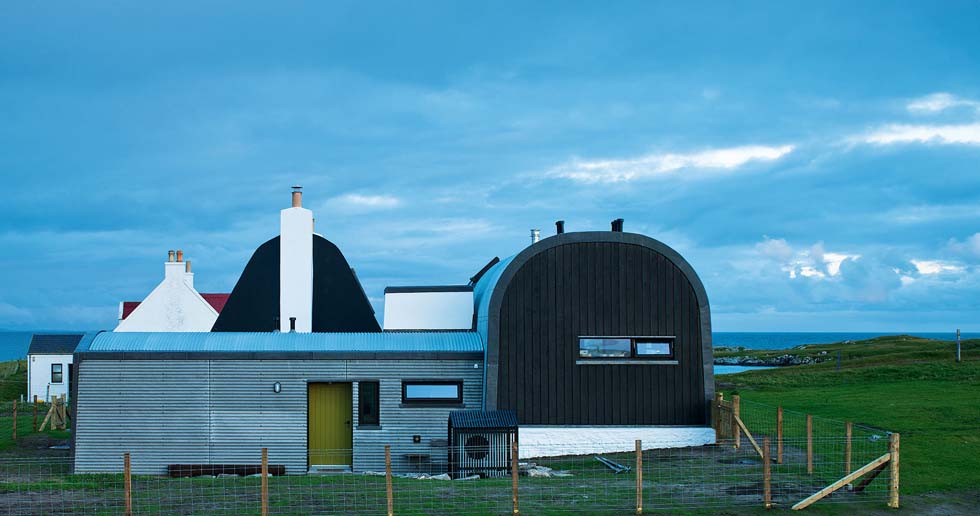 The home is quite close to a neighbouring property, so windows have been strategically placed to ensure the house gets amazing views, but neither property feels overlooked

The Kerrs wanted to avoid anything ostentatious that wouldn’t fit in with the rest of the island. The structure needed to be able to stand up to Tiree’s prevailing winds, and also be well insulated for the cold winter months.

They also wanted a light, bright and comfortable home, with enough room for gatherings with the extended family.

Their architect son, Murray, came up with a two-house concept. The one half would be based on the original blackhouse and be connected to a new agricultural style building by a glass roofed utility wing.

The blackhouse wing houses bedrooms and a snug, and the curved roof barn structure acts as an open plan living space for the kitchen, dining and utility spaces. Although very different in style, the two parts make the home look as if it has evolved over time — the practical corrugated steel section appearing to be an addition to the traditional white brick cottage.

The robust, corrugated, galvanised steel and fibre-cement curved shell of the agricultural-inspired addition offers bunker-like protection from the elements. The striking arched building, which houses kitchen and living area, was created with the use of a glulam frame.

Inside, there is a strong Scandinavian vibe with pale wood and lots of natural materials. Exposed stone and blackened beams have been used in the cosier cottage section and then sleek, modernist furniture in the living area. This has all been tied together with pine and oak furniture and fittings.

Tiree experiences harsh winters, so efficiently keeping the house warm was a priority. Extra insulation was added to the roof and walls to make the house retain as much heat as possible in the colder months.

Then, to heat the home they have installed woodburning stoves in the main living spaces and underfloor heating. Hot water for the UFH, and showers is provided by an air-source heat pump.

The main challenge during the project were the geographical limitations. With their architect based in London, Liz and Dave in Glasgow and a local contractor who had never worked on something like this before, all decisions and instructions were made over the phone and through forwarded sketches.

The expense of getting workmen and materials to the remote island was also of concern. In fact, a project costs about 20 percent more than on the mainland because of freight costs and accommodation fees.

They also faced a holdup when the tanking in the basement failed and they had the unprecedented costs of pumping equipment to drain it.

However, the construction of the 168m² house ran smoothly taking just under a year, on time and on budget. The result is a home which is striking and well-suited to its location, and – thanks to considered placement of windows – full of light without being overly exposed.